The first time I saw a Griffin in the 200x MYP version of the He-Man cartoon I was blown away. They were huge and menacing. Naturally I was very excited when Mattel announced that they were making one for the MOTUC line. When I heard they were using the Battle Cat buck I was a little disappointed. There is just no way for it to be as menacing using that buck. The body just isn't tall enough. I understand their need to keep costs down and reusing some of the part helps. I also understand that a lot of fans wouldn't want to pay even more for a Griffin, so this is what we have to work with. 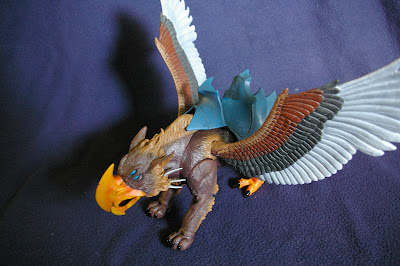 I'm just going to say that even though it's a little smaller than I'd like, the Griffin is an awesome toy. It features an all new head with an articulate mouth, Swiftwind's wings, new armor,  a new double tall, and chicken feet for it's hind legs. This is a really cool creature.  I love how angry the Griffin looks. With the little eyes and the hair on the top of it's neck standing up. The shading and colors on the body and wings are great. 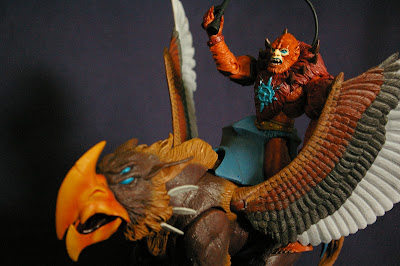 I had to include a picture of Beastman riding the Griffin. Without him Skeletor could have never harnessed a fleet of Griffins to transport his evil warriors into battle. The Heroes really have no defense for flying creatures this powerful. Beastman is able to control the Griffins and all wild beasts. Beastman fits nicely on top. I wish the saddle fit the Griffin just a little bit more securely. It moves around just a little bit more than I'd like. 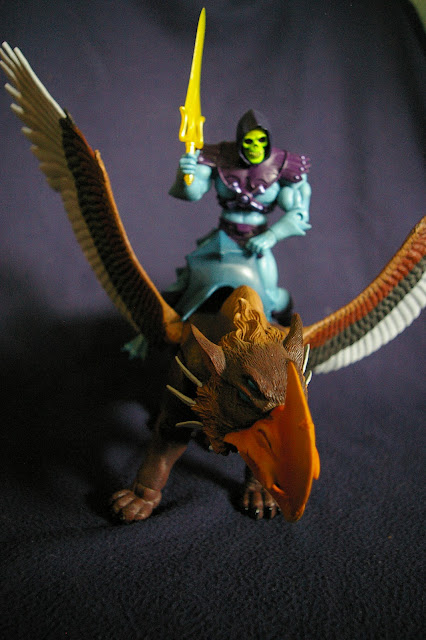 Here is an other angle of the Griffin's nasty looking face. It's ready to tear some heroes apart. The Skeletor figure on top the Griffin is from the Lex Luther vs Skeletor comic 2-pack with the Alcala head form Demo-Man. The front of the saddle is shaped nicley, you can make it look like the rider is holding on. 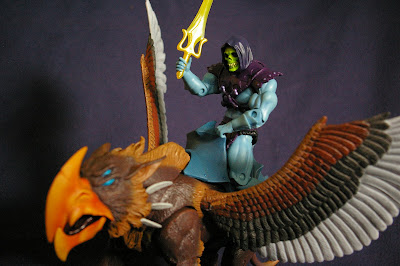 I liked this angle also, so I'm throwing in this photo also. Skeletor's sword almost looks like it is glowing.
Posted by Buzz Chuck at 8:41 PM