Time for this weeks installment of AFA Easter Eggs and Notes on Episode 5. This is all the stuff we would say about these episodes if we recorded DVD commentaries for them. So hopefully you've checked out this episode. Here are a couple of things to look for on a second viewing.

The dumping toys sequence in the opening has been sped up quite a bit this time.

Is anyone surprised the toys are laying around bored at the beginning of the episode?

1:57 I bought a VHS tape online in college called "Kate's 8 hours of 80's Commercials".
Off and on my friends and I would watch the tape for a half hour or so at a time. There are a lot of clips from it in the dream scene, and watching the Animal commercial on the tape gave birth to this plot device. 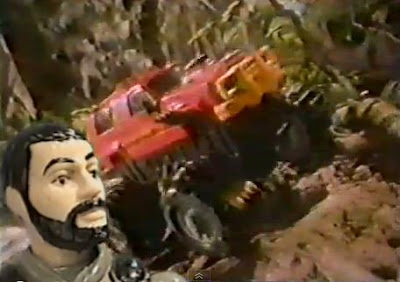 I owned the yellow Animal as a kid but sold it at a yard sale. The red Animal in the show is Derek's.

4:13 I didn't want to wreck my Construx man but Derek had scripted that they pull his head off.
We went to the Q-Mart (a local flea market and farmers market) and hunted around for another figure to damage. We reference the destruction of this figure in the 10th episode of our other show Animation Creation. We were working on both shows simultaneously. AC was at the end of production while AFA was starting.

5:11 In Crazylegs' presentation he shows Leonardo, Scarlett, Snake-Eyes, Luke, and Han cheering for him.

5:33 I love that Derek has Leonardo break the fourth wall and mention the amount screen time he's had in the show. The Turtles (Especially Raphael) did this all the time in the TMNT cartoon. I find this extra funny because Derek was one of the only kids I knew in the late 80's  and early 90's that wasn't into the Tutles

At the end of Leonardo's rap we see most of the remaining hero figures. There are several of them that still will not make it to the end of the series.

10:14 Barbeque's question, "What kind of a GI Joe are you anyway?" Is in reference to Scoops anti military remarks, but also a comment from Derek about the figures I chose to use in the series. The Battle Field Photographer and the Firefighter are two of the main characters. The GI Joe in a Hawaiian shirt also got a big role.

10:32 Here we see the Lego versions of Barbeque, Scoop, and Clutch have not chosen sides in the battle and are hanging out with Chuckles. 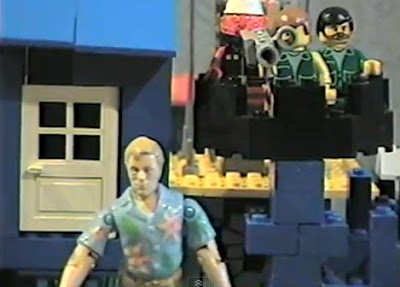 10:56 The Lego guy with the Shovel is an homage to William H. Macy's character in the movie Mystery Men. The Shoveler. "Lucille, God gave me a gift. I shovel well. I shovel very well." 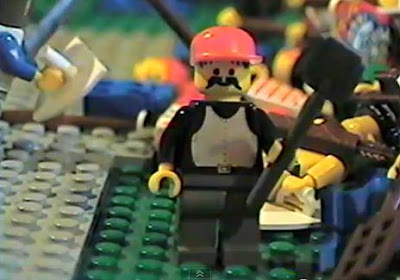 11:33 When the Lego Islander get chopped in half it is reveled that the Lego people have constructed a statue of Chuckels. 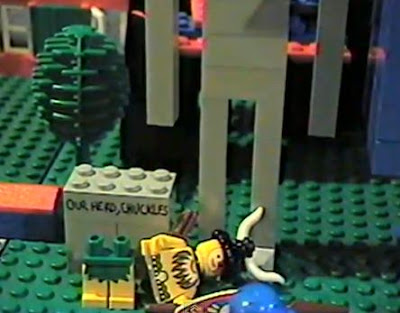 12:00 The Triple A batteries Clutch and the Flunkies are carrying were from my Graphing Calculator.

12:40 This is the first time we see outside the window since the first episode. While the show seems to happen over the course of a couple of days we can see that production took a long time. The grass is all dead and the Tree outside the window has lost all it's leaves. The seasons changed a lot during the past few episodes.

13:11 For the shots where it looks like the camera is outside the room looking into the window the toys were lined up against the edge of a black 3 ring binder to represent the window sill.
Posted by Buzz Chuck at 11:35 AM