Well the neighbors are all setting off fireworks so I decided to fire off a few fire crackers and film it. Last time I made a 4th of July video I got a few fun freeze frames of the explosion in from of some Power Ranger Megaforce figures. Maybe we can make some magic happen again. Stay safe! 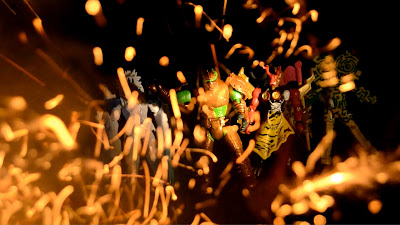 Master Sldege and his forces march through the flames of war in their never ending battle to steal the Dino Charge Power Rangers' Energems.
Posted by Buzz Chuck at 11:51 PM