I know I've posted about this figure before, but he didn't really get his own true post. So I decided to show him a little more love. Superman was the first figure I got from the Super Powers toy lines. He was one of the few DC Heroes I had in figure form until the Tim Burton Batman was released. I played hard with this guy, He went all over the place with me. He's loaned his cape to dozens of other action figures in my collection over the years. You can see he's got a lot of paint wear on his chest and waist. I touched up his hair with a sharpie marker one time as a kid. The "S" on his cape has been missing so long I almost forgot it was ever there. He's even got a little blue Play-Doh residue in some of his sculpted details. This is a well loved toy. 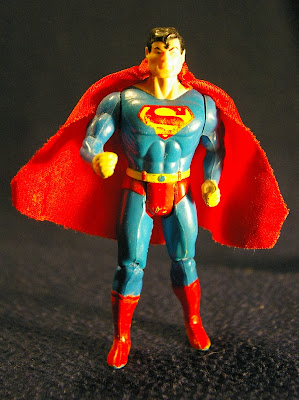