Yesterday was the Great Allentown Comic Con. This was the second time I've been to the show. The guest that grabbed my attention this year was Walter Jones who played Zack on the Mighty Morphin Power Rangers. I loved the show as a kid and watched it religiously. I was really bummed out when Walter and two other actors left the shoe part way into the second season. Their characters were written out in a way that left hope for their return. The other characters even received letters from the absent characters from time to time throughout the rest of the season. I enjoyed the original cast so much that I always resented their replacements. 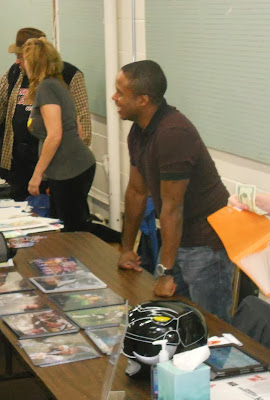 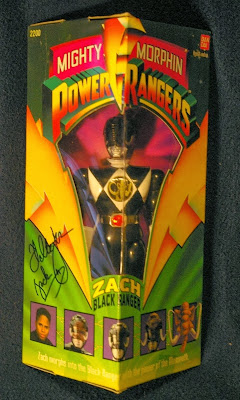 In typical Con fashion, Walter had a table and was signing autographs and taking pictures with fans. He was charging for both, but that's to be expected I guess. I brought a 90's Black Ranger figure still sealed to get signed. I like that the old packaging shows Walter's face morphing on the bottom and refers to the toy as Zach. I purchased the figure off ebay shortly after he was announced as a guest.

Walter participated in a panel along with an actor from the Last Dragon. They talked about their interest in Martial Arts and then answered questions. One of the fan boys asked Walter to hold up the prop morpher he had with him and say Mastodon. I wasn't ready for it, and had to switch my camera from still picture to video. I missed recording him say "It's Morphin Time!" but I did record "Mastodon". The video is super short.


Walter had two cool prop replicas with him, a morpher and a ranger helmet. When people payed for a photo op with him, he'd hold the helmet and they would hold out the morpher. People were having a lot of fun with it. I think the morpher he has there is the new legacy morpher, I'm not sure where the helmet came from. During the panel Walter did say the only show props he has are the skate board he rode in the pilot, one of Zach's shirts, and the neon sign from Ernie's Juice Bar. 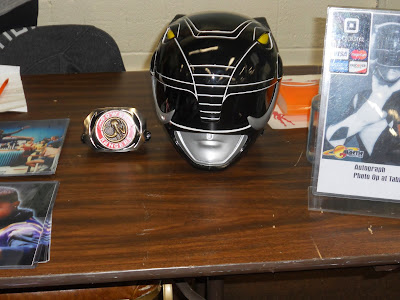 I'll be posting more show coverage tomorrow.
Posted by Buzz Chuck at 9:04 AM