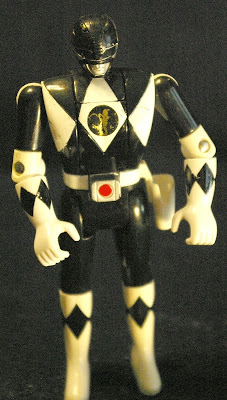 This year is the 20th Anniversary of the MMPR and the current show Power Rangers Megaforce is a lot of fun. I've been enjoying a lot of the new 20th Anniversary products, but today I'm taking a look at a Ranger toy from back in the day.

This is the Auto Morphin Zach action figure. The Auto Morphin toys have a pretty cool action feature where their torso contains both a teenager head and a Ranger helmet and with a touch of the Morpher on their belt, the figures chest springs open and the head flips over morphing them into a Power Ranger.

Like most of the 90's Power Ranger toys, Zach has a large Power Coin emblem on his chest. They did not have logos on their uniform in the TV show, and it annoyed me some that the figures were not very screen accurate.

Zach originally came with a gray Power Axe and a while Blade Blaster gun that would fit in the holster on his belt. 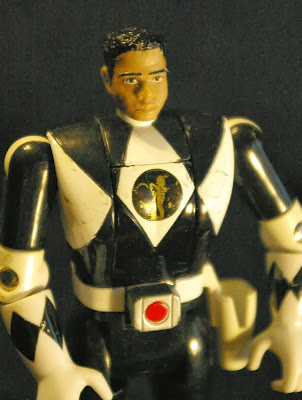 The Auto Morphin feature only flips their head to helmet. You must manually reset them back to being in their teenager form. Some of the Auto Morphin Rangers look more like the actors that played them than others. Zach really doesn't look that much like actor Walter Jones. His hair cut is okay, but his ears are too big and his skin tone should be a little darker.

I don't have Zach's original accessories because I bought my Auto Morphin Rangers off Ebay in the mid 2000's to create a stop motion animated spoof. We had some funny ideas, but we were pretty backlogged on other projects and it never happened.

I'm kind of glad I bough them back then. I had a lot of fun playing with my little cousins with all their Power Ranger toys, and they look good on display with my other (modern) Ranger toys.

Today I'm heading up to the Great Allentown Comic Con. I plan to hang out with my buddy Paul some. He has a store where he sells vintage toys and video games at the venue. The show will have a lot of cool guests and I enjoyed the Panels the last time I went. Some of the guest include the girl who played Aunt Beru in Star Wars Episode 2 & 3, the girl who provides the voice of Ash on the Pokemon cartoon, comic book inker Scott Hanna, and the Original Black Power Ranger Walter Jones (Zach).

Should be a fun time. There are lots of other guest, but those are the ones that I think are funny or interesting. I should be posting about the show tomorrow hopefully.
Posted by Buzz Chuck at 6:44 AM