More than 10 years ago, a couple buddies and I were planning a Batman stop motion video project that would use various different styles of Batman toys to tell several short adventures. Basically, in the future someone would excavate the Bat-Cave and while reading case files found in the Cave the excavator would imaging these adventures. Each story would use different toy lines. One would use Super Power style figures, one Animated Series figures, and one Tim Burton movie figures. I picked up a beat up DC Heroes Mr. Freeze figure who was missing his helmet dome at a yard sale. So I fashioned a new helmet for him from a small bubble from a quarter machine. I used a light blue paint to cover up the areas I sanded and glued to make the new dome fit. I also painted a few other small details on the figure. We never made the video, but I still have this Mr. Freeze lying around. 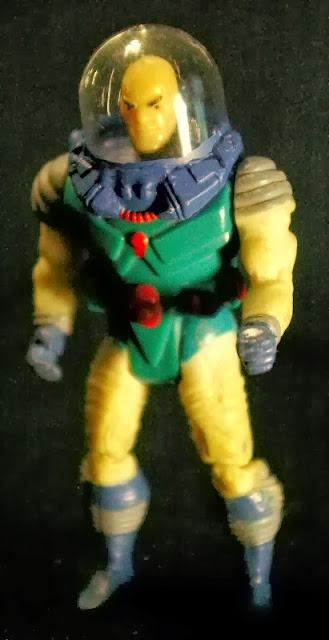