The GI Joe Collector's Club has been running a Figure Subscription Service for a little over a year now. I signed up for the FSS 1.0. This set contained 13 figures. 12 were revealed before the service started, and the last figure was a surprise. I've gone back and forth on opening them or keeping them sealed. The figures are more expensive that store releases, but are also more limited. Because I wasn't dying to own all of them I kept them carded. I was disappointed because one came unsealed in the mail. I subscribed to the FSS 2.0, and so far one figure out of both shipments have arrived unsealed. I don't know if the glue comes undone in the mail due to cold weather or what.

I talked to customer support about the first figure, and they told me many collectors were just gluing the bubbles back to their cards. I talked to the club president about the first figure from the second series and said that customer service would replace it if I wanted. Now I have a second figure that isn't sealed from series 2. I find this to be very annoying. I get toys from Mattel in the mail every month and they always arrive in perfect condition. The club President tells me the figures are made by Hasbro and are sealed just like the ones in the stores. I know Toys R Us wouldn't want to carry a product where 3 out of 17 came in packaging that made them unsellable. 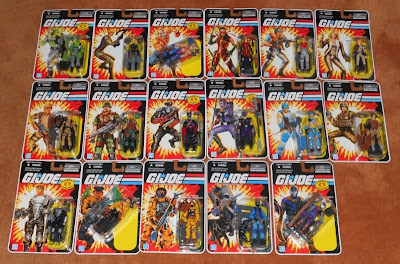 Maybe I should just open them all and not worry about it, but since they cost almost 3x the price of the figures in the stores and I can't pick and choose which one I buy, I'd like to know they are coming Mint on Card so I could sell off some of the ones I don't want. I don't think I will not be signing for FSS 3.0
Posted by Buzz Chuck at 10:03 PM