I recently received the Arkham Asylum: Batman vs Bane Action Figure 2-Pack from DC Collectables. The set includes two beautifully sculpted toys. Batman is about 6.5" tall and features a rubbery cape and decent articulation. He's up against an 8" Bane with giant venom backpack and rubbery venom tubes. These figures are from the extremely popular Arkham Asylum video game. For the game Batman's costume is a pretty standard comic book batsuit. Bane has a lot of Kelley Jones influences, but he's dressed in prison jumpsuit pants, shackles, and a steampunk venom system. 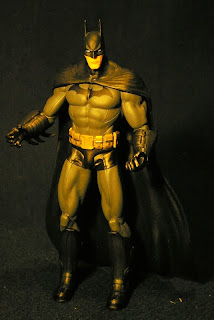 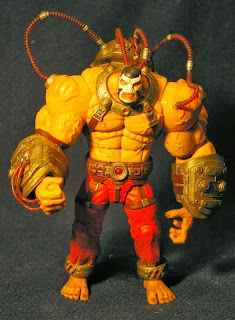 Both figures are decently articulated. Bane is a little better than Batman, who is hindered by his cape. Both figures stand well, even though Bane seems very top heavy. Both figures feature very detailed and clean paint applications. Batman's gloves and boots have a slightly armored feel to them, which makes sense since he's a regular guys fighting super villains and wackos. 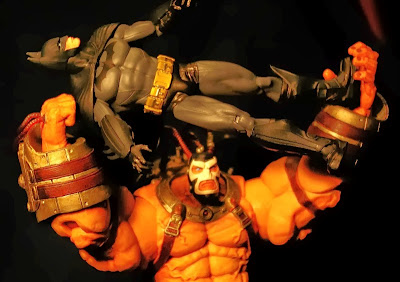 Bane's backpack is a separate piece, but isn't fully removable because of the tubes. There is a large void in his back where the backpack actually plugs into the figure. 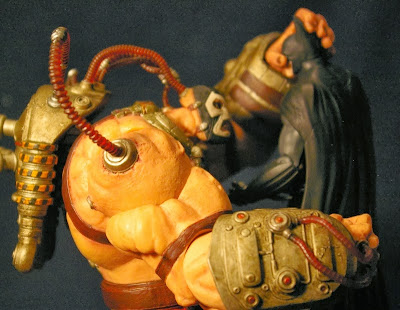 Bane has a really neat looking cybernetic spinal cord sculpted on his back. His hands and bare feet are also enormous. This is a really cool set for fans of Batman, Arkham Asylum, or Knightfall. 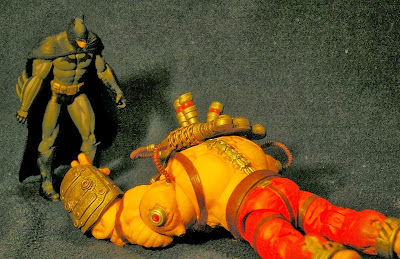