I was in college when the movie Spider-Man came out and it blew me away! It was such an awesome and exciting thing to see one of my favorite heroes on the big screen. I bought one or two of the figures from the movie and they eventually got used in the stop motion animated series I was creating for my college's cable channel. A little while down the road I really wished I had bought the Wrestler Spider-Man.

Wrestler Spider-Man is an interesting figure. He can be converted between both costumes Peter wore in the film. His wrestling outfit, which is a sweatshirt, windbreaker pants, and a mask, can all be swapped for his super hero suit. 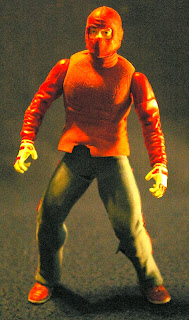 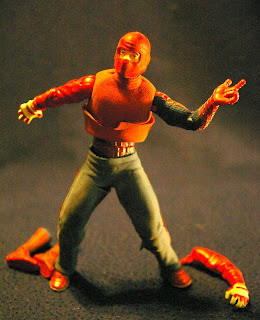 This figure is a traditional Spider-Man figure with a rubbery removable mask. He includes wrestler arms and boots that can be switched out with the Spider-Man parts. He also came with rubbery windbreaker pants, sleeveless rubbery sweatshirt, and  rubbery ski mask. So he can look like the Wrestler Spider-Man, Super Hero Spider-Man or even unmasked Spider-Man. I bought mine a couple years later at a yard sale. My figure has all the parts needed to create his wrestler look. I also have both Spider-Man boots, but only one arm. So I'm missing the Spidey mask and one arm. I think in the future it will become extremely hard to find a complete figure. I'm worried that over time the rubbery pieces will breakdown. My figures has a piece missing from his shirt and the tear in his pants. Even if you never really play with him I worry about the parts breaking down from UV light. 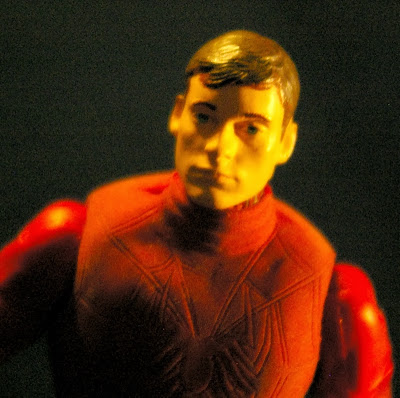 As I was saying before, in college my friends and I were making two different animated shows. One was kind of finishing up as we were starting the second. So there was some overlap in production. For the final episode of Animation Creation there was a portion where our characters were being interviewed by several different people. Since Peter Parker works for a news-paper I thought it would be funny if he was on of the interviewers. (I also wanted Clark Kent, but couldn't get a hold of a Super Powers figure) Plus we could get the guy who was voicing Spider-Man in our second show (Action Figure Adventures) to voice Peter. I looked all over at toy stores for old stock as well as at some collector shops but couldn't find a Wrestler Spider-Man anywhere. We ended up using a Happy Meal Peter from the 90's cartoon for the scene. You can check it out here.
Posted by Buzz Chuck at 9:17 AM