Back in the late '80s RoboCop was the most violent thing in theaters. Yet somehow there was a short lived cartoon and toy line for kids. I actually had a bunch of the toys without seeing the movie. I was disappointed to find out that RoboCop's car Robo-1 was not in the movie when I finally saw the film. 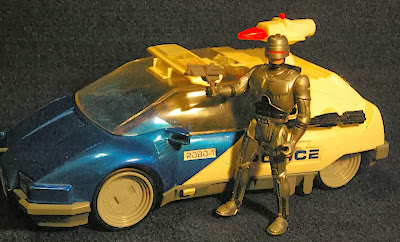 Robo-1 can seat up to two action figures and features a spring loaded missile launcher. Like the Robo-Cycle, which I posted about previously, Robo-1 has really cool blue-chrome armor on the front half. 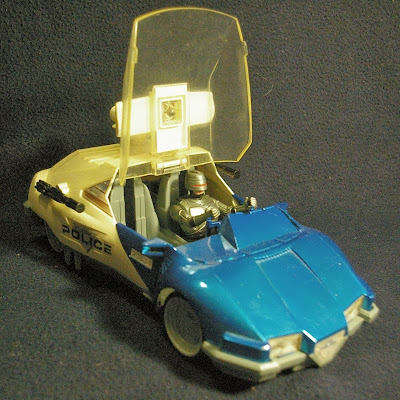 The car's windshield/roof flips up to allow the passengers to be positioned inside. Notice how the seat backs have slots cut into them. This allows the figures to sit down, since they all have the cap firing levers on their backs. 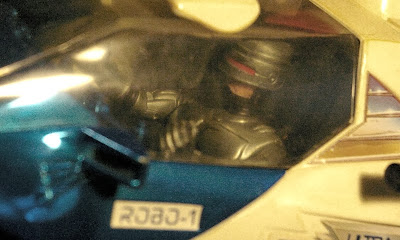 Robo-1 is decorated with a handful of stickers. The car also has two side mounted black guns. Considering the fact that the figures all had cap firing features, I was always surprised the car didn't fire caps also. 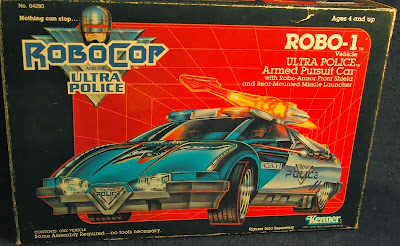 The box to my Robo-1 has some wear and tear, but I've stored my car in it's original box along with my RoboCop figures since I was a kid. I really like the artwork on the box. The artist did a nice job of representing the chrome armor in the artwork. I had a ton of fun with this car as a kid. 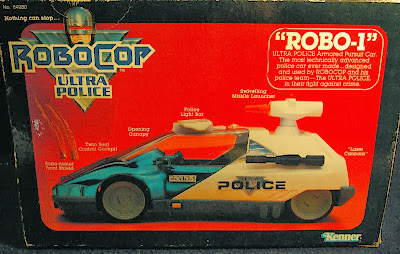