As I kid, I remember being shocked when a friend showed he his Dad's GI Joes and they looked like Ken dolls. It was my introduction to the fact that the 3 3/4" action figures I played with were not the first time Hasbro had made awesome army figures. As a first grader I had a hard time grasping the fact that GI Joe existed without characters like Duke and Snake-Eyes. I remember asking my Dad about the larger action figures and him shared a few memories he had of the original action figure with me.

In 1992 I began to see the large versions of my favorite characters showing up on toy shelves as Hall of Fame figures. Hasbro released a 12" version of Duke, Stalker, Snake-Eyes, Destro, and Cobra Commander that year. My interest in the main regular line was starting to fade at this point. I only got four carded 3 3/4" figures that year. At the higher price point I didn't jump at the 12" figures either.

Just last week on ebay I purchased a sealed 12" Hall of Fame Snake-Eyes figure from 1992. He's based on Snake-Eyes v4 from the 3 3/4" line. He is packaged in a beautiful window box that show off the figure and his gear inside. The back of the packaging shows off other fugues from the line and the character's file card. 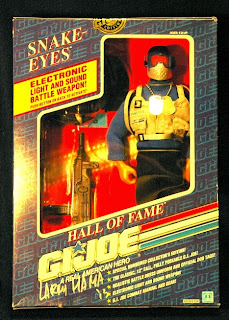 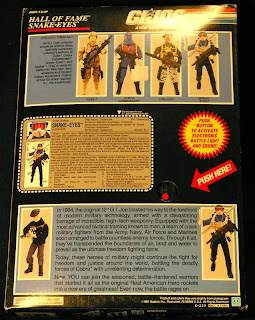 This isn't my first 12" Joe, but he is one of a select few. Why did I jump at the chance to purchase this figure if I don't really collect 12" Joes? Well, if you are observant you may notice that the front of the box is signed by GI Joe file card and comic book author Larry Hama.In fact this Snake-Eyes figure comes from Larry's personal collection. Recently Larry asked toy historian and author Mark Bellomo to help his sell off some of his GI Joe collectables. Most of the items Larry was selling were from the early 2000's but the Hall of Fame figures caught my eye. Since I had a small collection of carded Snake-Eyes figure I focused my bidding on him. 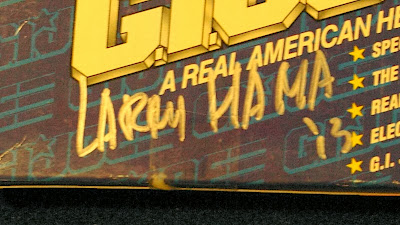 As a kid I had a hard time learning to read. By the end of first grade when my parents and teacher figured out I needed glasses to see much I was so far behind and had to repeat first grade. Everyone knew I was having trouble learning to read, but I hide how bad it was by reading the lips of a kid in my class who moved his lips when he read to himself. This allowed me to know what we were supposed to have just read to ourselves off the board, which I could never see.

My parents took me to an eye specialist who hooked me up with glasses with prisms inside that magnified and helped my eyes to focus. I repeated first grade and was doing better, but not as well as I still should have been second grade was more of the same. Third grade was a big turn around year for me. The school finally determined I had a learning disability and go me extra help. I also had an amazing homeroom teacher who let us, for the first time in school, read what ever we wanted. Finally, I was allowed to read comics at school! Along with the glasses and extra help, I finally had the desire to read on my own. My best friend's Dad, Doug Moench, was giving me copies of all the comics he wrote each month along with a copy of Larry Hama's GI Joe book. Doug knew I was a huge GI Joe fan and Marvel was sending him comps of every book they published each month.

I give credit for a majority of my academic success to my third grade teacher and two comic book authors who made me actually want to read. My parents and sister worked with me a lot to help me learn to read, but it took me wanting to read to be successful. Math still wouldn't click for many years. The comics eventually  lead to reading Goosebumps books and then the Star Wars novels of the 90's.

20 plus years later, now that I am a middle school and high school teacher with a Masters Degree, I still remember sitting at my desk at Bedminster Elementary School sounding out words in a little comic bubble above Baroness's head as she explained her hatred for the GI Joe known as Snake-Eyes.

a special Thank You to Ms. Ross, Doug and Larry
Posted by Buzz Chuck at 4:13 PM