For the past three years Hasbro has offered a cool GI Joe & Transformers exclusives. The first one I wanted so bad (Skystriker/Starscream) but never got. The second one was easy for me to pass on (Modern Hiss Tank/Shockwave). This year the set features a Skystriker/Jetfire and a Vamp/Hound and when is showed up on Hasbro Toy Shop I had to pick it up. 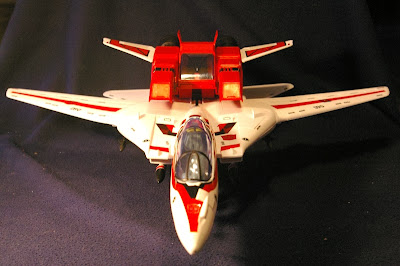 The original Jetfire was one of the largest Transformers jet. The mold for the G1 Jetfire came from the Robotech line. Hasbro used their modern (retooled) Skystriker toy with a new piece that can be added to the rear of the plan. There was some talk online about Hasbro getting sued over this toy which looks like the Jet from Robotech. From what I read they settled the lawsuit out of court 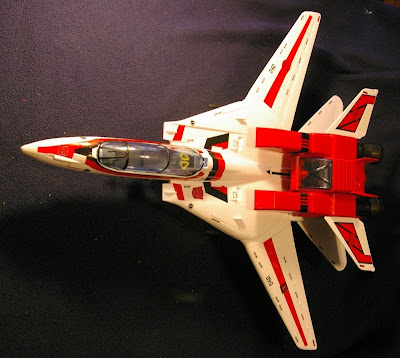 Autobot Jetfire retains the Skystriker's mechanical wing and landing gear movement. Although the add on piece covers the lever to activate the feature. Jetfire's add on piece attaches where the rear fins attach to the plane. The back also features a second cockpit. Jetfire comes with about a million stickers. It was a lot of work to get them all on there. 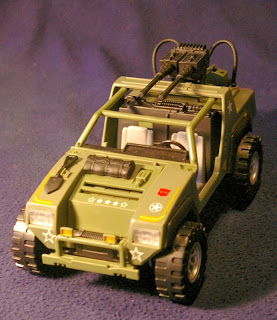 Autobot Hound is just the modern (retooled) Vamp with some new stickers. Hound comes with the rear mounted laser cannon and two gas cans. Just like Jetfire, Hound can not transform he's just a GI Joe vehicle decorated to look the Transformer in vehicle mode. Hound can carry two GI Joe figures inside. His hood also lifts up to reveal his engine. 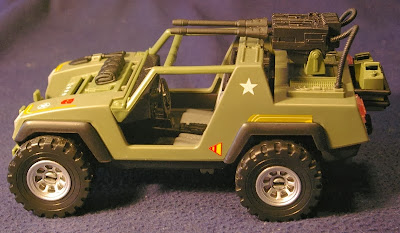 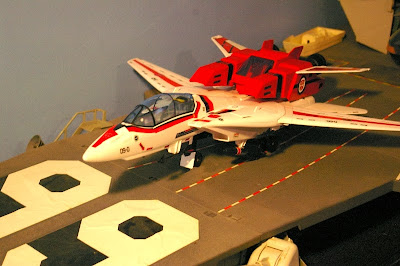 Jetfire taking off from the USS Flagg 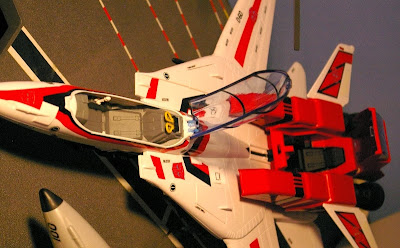 Here is a view of Jetfire with both of his canopies open. One action figure fits in each cockpit. Jetfire also has two panels that can be removed for "maintenance". 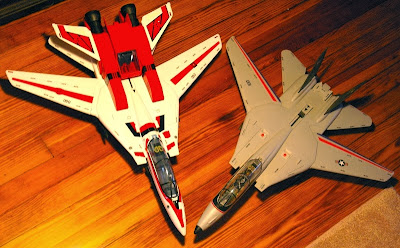 Here is a quick comparison shot of Jetfire and the standard Skystriker it is based on.

I'll be posting the figures from this set in the near future...
Posted by Buzz Chuck at 11:29 AM