Since so many different items were included in this Comic Con Exclusive Set, I decided to break it up into two posts. Check out Part 1 for information on the GI Joe Vehicles decorated like Transformers from this set.

The set included the two Autobot vehicles, a GI Joe, and an Autobot "accessory". Part 1 showed off Jetfire and Hound. So this post focuses on Snake-Eyes and Blaster. Snake-Eyes is basicly just a repaint of a previously released figure. He's dressed in his usual black gear with camo pants. He reminds me a little of a custom figure I made a while ago. Snake-Eyes is armed with a sword and uzi. Blaster, the boom box Autobot comes with three cassettes that can be inserted into him and features a peg that allows him to be worn like a backpack on Snake-Eyes. A similar Soundwave tape deck came with last years Destro with Shockwave/Hiss Tank set. Snake-Eyes has an Autobots logo on his shoulder. 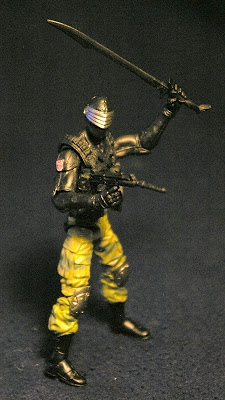 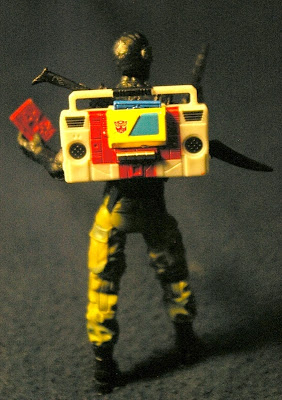 Here you can see a close up of Blaster and his cassette tapes. 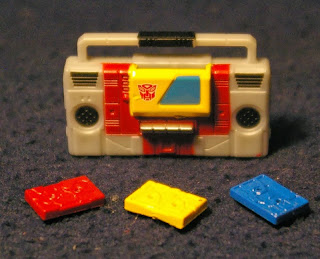 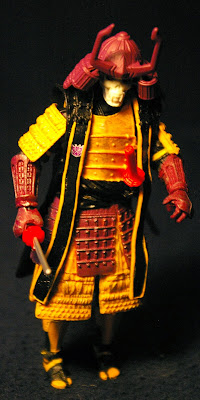 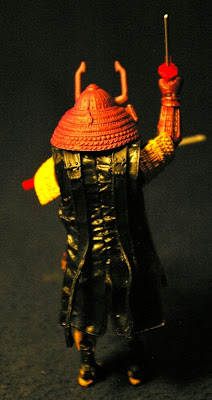 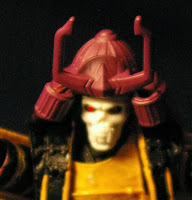 The 2013 SDCC set included a Decepticon figure, a Cobra figure, and a Decepticon accessory. One of the bad guys included in the set is Bludgeon. This is a character I was unfamiliar with before getting the set. He's made using the new Budo body with an all new head. Bludgeon was a G1 Pretender figures released in 1989. Hasbro took a lot of liberties with this figure, but he's cool. I wish his legs had a better range of motion, but his armor really gets in the way. The sculpt of his skull head along with his helmet remind me a little of Skeletor from the New Adventures of He-Man. Bludgeon has Decepticon logos on his robes over the armor. He includes a removable helmet and two different length swords. 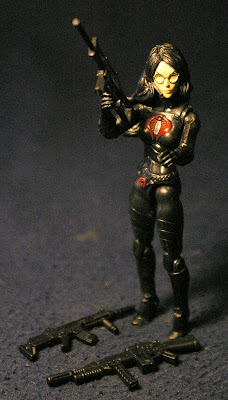 The lone Cobra included in the set is the Baroness. She has a reused body, but an all new head sculpt. It's interesting that she has a sculpted on microphone.


Baroness comes with three different guns.One of them screams Baroness to me. One is an updated version of my all time favorite GI Joe weapon, the Viper Rife. The third gun doesn't really do anything for me.


Baroness' new head sculpt looks really great. I like the way her hair is blowing in the wind. Her Cobra logo also looks great on her chest. 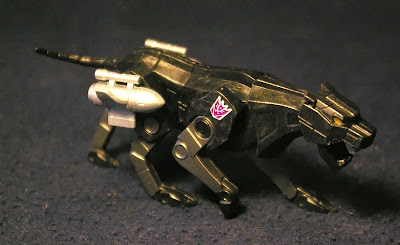 Soundwave is my all time favorite Transformer, and all his little cassette buddies come second. Ravage is my favorite of his cassettes. He was a driving factor along with Jetfire for me to buy this set. I was pretty bummed out when I found out he only has one point of articulation. If this guy was fully articulated he's be incredible. His only articulation point is at the back of the neck. Shoulder joints would have been nice, and elbows would have been awesome. He's an accessory, not really a figure. 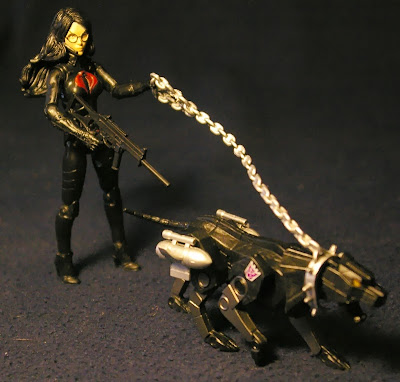 Here's my best attempt at recreating the image that started the buzz for this Exclusive set. Baroness walking Ravage. The concept is based on a Devil's Due comic cover from GI Joe / Transformers. 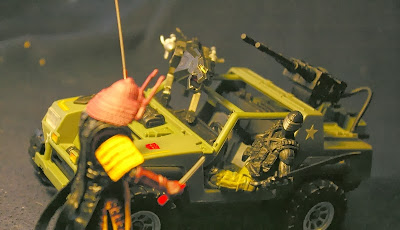 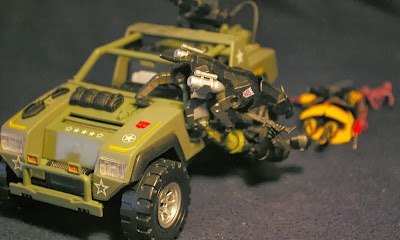 Snake-Eyes neutralized Bludgeon, but Ravage won't give up without a fight.
Posted by Buzz Chuck at 1:16 AM