Rumbler was the vehicle driver to the Radio Controlled Crossfire vehicle. Rumbler was made using no new parts. Hasbro just combined parts from several other figures to create this one. Rumbler has very minimalistic paint apps to boot. Rumbler is made using the head of Footloose, the torso of Heavy-Metal, and the legs of Bazooka. Rumber is armed with a brown helmet and gray gun, both of which previously came with other vehicle drivers in different colors. 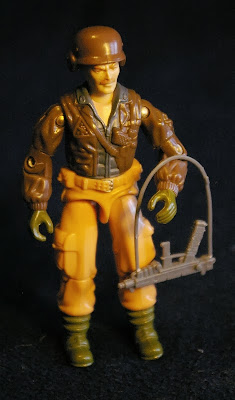 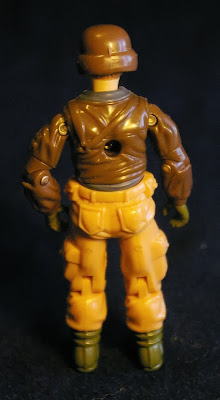 In 1987 my friend Will and I both got the Crossfire for Christmas. Our parents had talked ahead of time and got us the alternative versions.The Crossfire was released in two different versions that operated on different frequencies. I played with that R/C car for years and beat the crap out of it.

As a kid I used to pretend that Rumbler and Footloose were brothers, considering they look so much alike. For a while in the early 2000's there were many jokes made about Rumbler's peach pants on the Joe Customs message board. They even sold t-shirts that said "Nice Pants" with a little 8-bit version of his pants.

It would have been interesting if Hasbro had given Rumbler a different hair color. This would have helped to make him look less like Footloose. I had fun with him as a kid, but he's not one of the best Joes, and he's often forgotten about.
Posted by Buzz Chuck at 8:35 AM