I usually post my Flea Market Finds the day I find them, but I was so shocked to find the DC Multiverse figures that I decided to post them first. Sunday was kind of cold. I crossed the frozen Delaware River to go toy hunting in New Jersey. The Flea Market was kind of dead as far as vendors go, and there were a ton of people looking for toys. Lots of competition, but I ended up with some great finds. 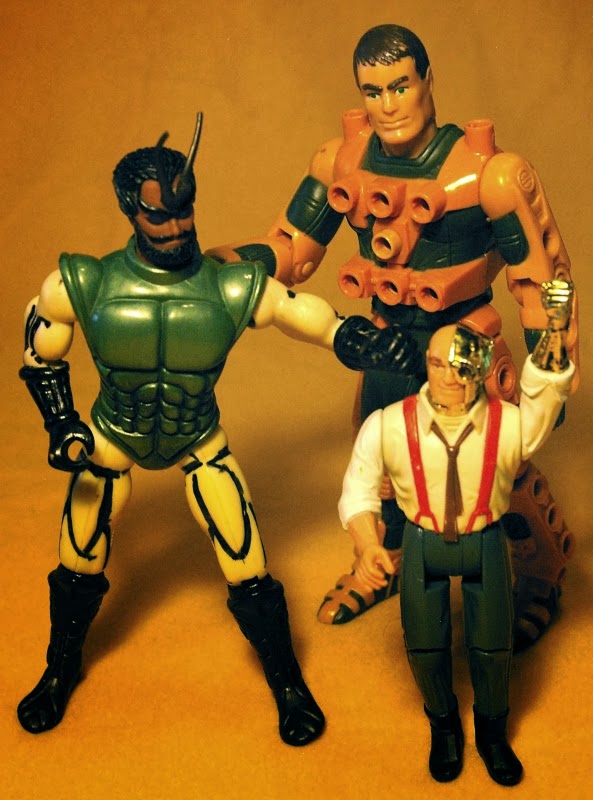 Jake Rockwell is the orange and green Centurions figure. These guys are covered in sockets that  weapons and gear can be plugged into in various combinations. The humanoid with antenna coming out of his forehead is from the Sectaur line. I'm not sure which character I purchased. The guy in dress clothes with the bionic parts is Commander Stargazer from Silverhawks. He is the Professor X of the team, leader but not field commander. 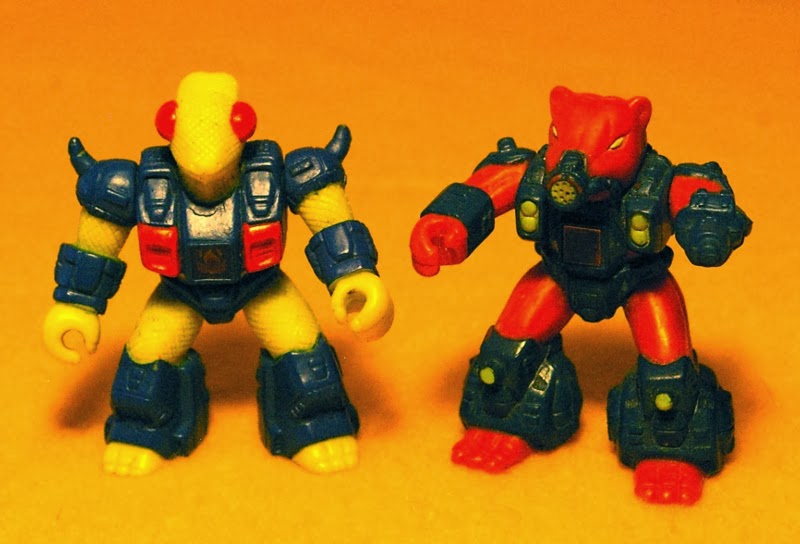 Shortly after buying these Battle Beast, I had a guy ask me how much I wanted for them. I was going to just give him Delta Chameleon since I already have him. When I pulled them out of the bag I was carrying my finds in, I saw they both still had their rub-signs so I told him I wanted to hang on to them. War Weasel is the name of the red furry Battle Beast. I always like the ones that had weapons instead of hands. 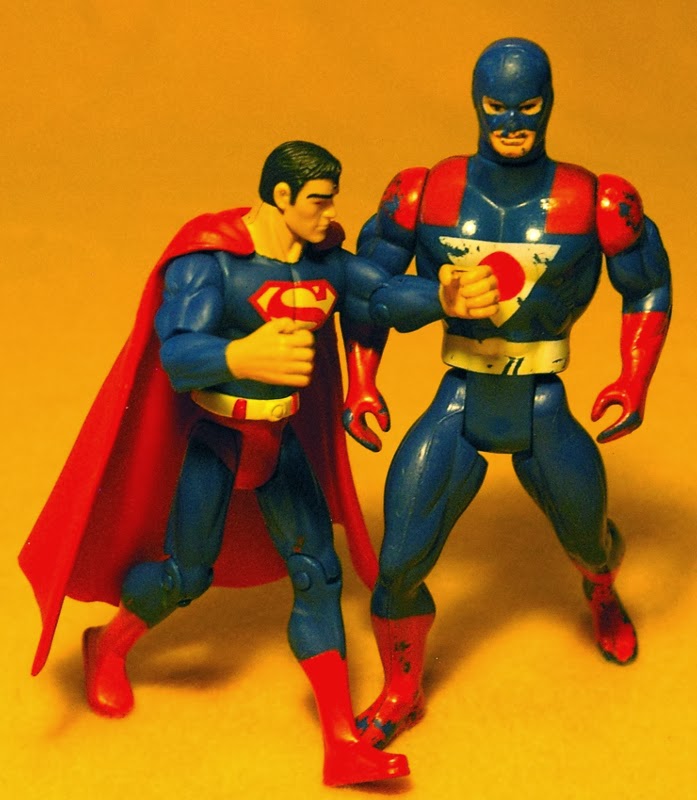 Infinite Heroes Superman was actually my first purchase of the day. His eyes have red paint apps. I'm not sure if that is a special variant or not. I bought the odd looking blue super hero because he is an obvious Marvel Secret Wars knock-off. He looks like he shares parts with Captain America. With a little digging online I found out he's from a line of knock-offs called Action Heroes Sparking Rocket Cycle. He original came with a red cloth cape like the Kenner Super Powers figures and a Rocket Cycle vehicle. Like many knock-offs this figure has no real name. This next batch of figures is from several different lines. The blue and white astronaut is from Robotix. The easiest way to identify these figures is to look for the large hexagon socket on their backs. The tan guy is Lt. Tank Ellis alongside the blue and chrome Major Hawk Masterson from Captain Power and the Soldiers of the Future. The next two figures who like kind of like vintage Star Wars figures are from a line of toys that seem to be inspired by Mad Max: The Road Warrior. Wheel Boss and Metalface or the leaders of the two factions from the  steel Monsters toy line. I had never heard of the line before researching them fir this post, although I have seen a few of the figures at flea markets in the past. The final figure in this photo is a blue demon minion from Blackstar 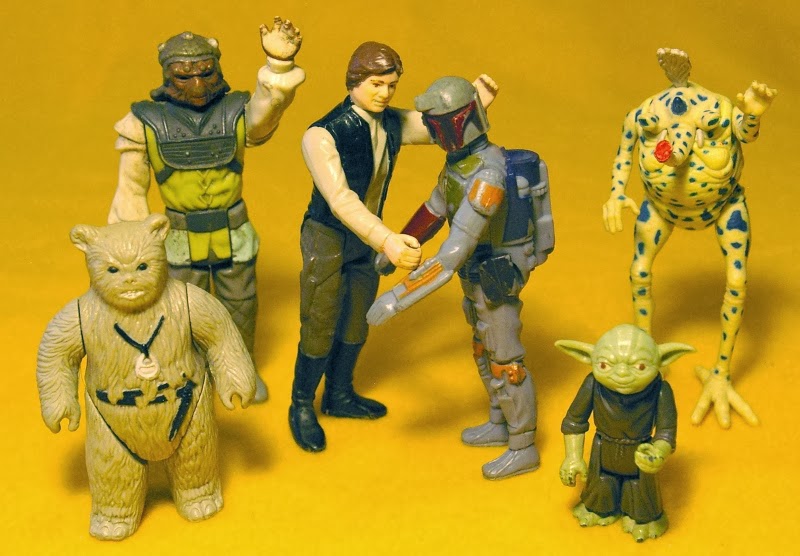 For several years I had been passing up on vintage Star Wars figures at flea markets unless they were mint or had weapons because I have the entire collection. Buying duplicates was pointless unless they could complete or replace the played with figures in my collection. I even sold off a dozen or more duplicates on Ebay about six years ago. Since so many of my blogging buddies are clamoring for Vintage Star Wars I figured I'd  star pick them up. Nikto the Skiff Guard is pretty beat up and yellowed. Chief Chirpa the light gray leader of the Ewoks is missing his hood. Han Solo without his Endor Poncho was always my go to version of the character as a kid. My buddy Derek always preferred Han in Bespin Gear. Boba Fett the dreaded Bounty Hunter is some how missing his rocket. Yoda the Jedi Master was always one of my favorite Star Wars figures. Sy Snootles is the singer from Jabba the Hutt's band.. 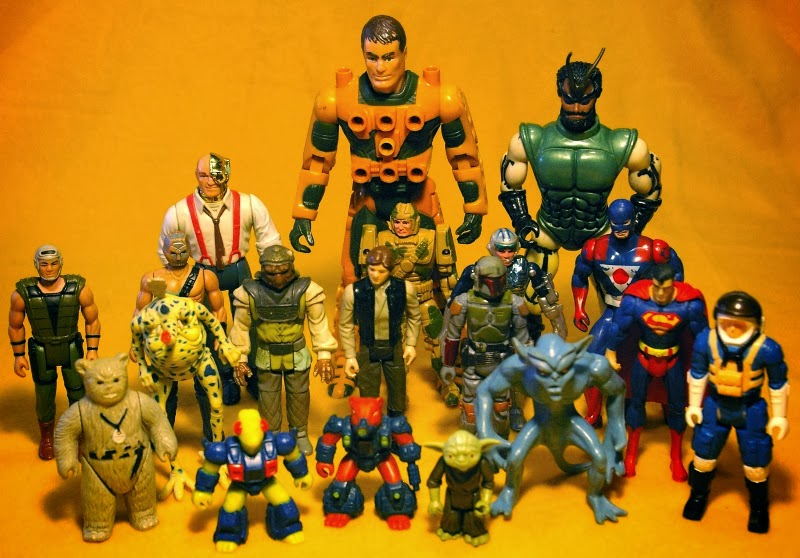 What started off looking like a weak showing at the Flea Market turned into an amazing day of finds. I bought all these action figures for a total of $7. I was pretty excited to find so many figures.
Posted by Buzz Chuck at 6:26 AM