Like most toy lines, eventually we get handed some ridiculous variants of the main characters. Teenage Mutant Ninja Turtles was notorious for this. Today's post is about the hot headed turtle, Raphael in a space suit. Why would a turtle want to go to space? who knows? Raphael originally came with a silver blaster, silver sword, yellow hose, and a clear plastic fishbowl helmet. His astronaut outfit is nicely detailed an included a large sticker  on his torso. 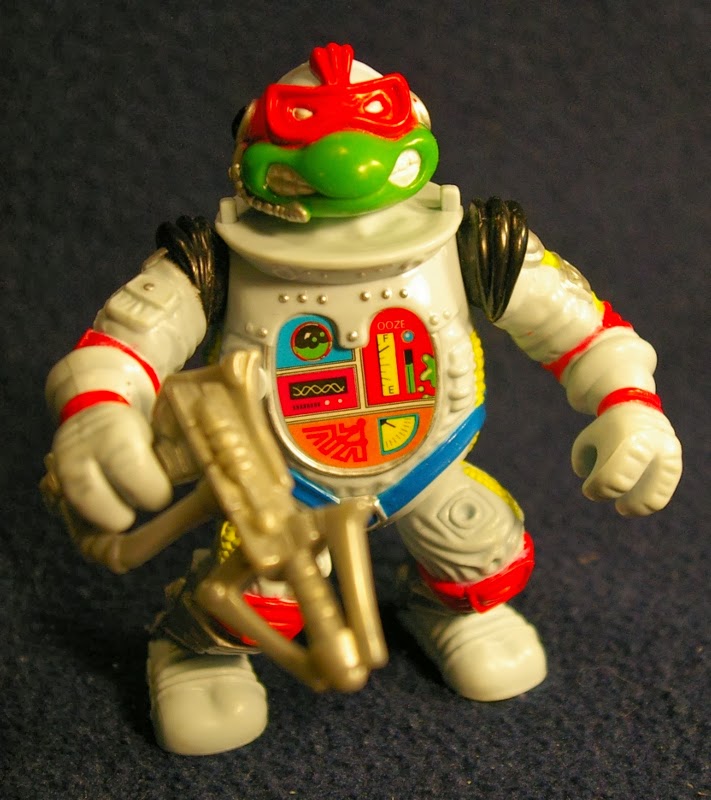 I think I've had three Cadet Raph's in my collection over the years, and none currently. I got him new in the pack back in the day. I played with his some. Then a friend from church, who was a little older gave me a handful of Turtles he'd outgrown. I got a second Space Cadet Raph with some of his accessories. The second one I used to like to take in the pool. I wouldn't use the original figure in the pool because of the sticker, but once I had a second one... he looked enough like a deep sea diver to have lots of summer adventures. The thought had also crossed my mind to paint all his red parts purple to make a custom Astronaut Donatello. Eventually when I was down sizing my collection I sold both figures.

Later I got the third copy, which is pictured above in a lot of TMNT figures my mom bought for me at a yard sale. After photographing him and having Raphael sit around her for a bit I sent him to one of my blogger buddies in a care package. His helmet was really his best feature.
Posted by Buzz Chuck at 6:44 AM