Over the past couple of years I have collected quite a few original animation cels from He-Man & the Masters of the Universe as well as several other shows. Below is a cel of He-Man holding his sword out in front of himself as if he is about to attack. His one foot is not drawn or painted in the cel. This indicates that something on another cel overlapped He-Man's foot in the finished scene. The MU92 marking tells us that this is the 92nd episode or Season 2 Episode 27. The episode is titled the Littlest Giant. 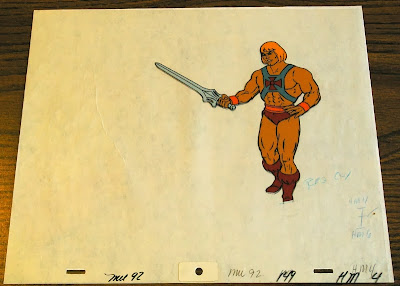 Here is the original production sketch that the cel is based on. Basically the artist draw the image on paper. Once the drawings are checked and approved they are Xeroxed on to clear plastic sheets and then they are painted from the back. 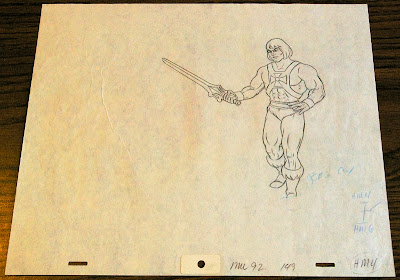 Here is the cel along with several other elements on other cels and the background as scene in the show. In the episode, one of the Widgets (kind of like Hobbits) asks Sketetor to make him big and strong like his hero He-Man. The little guy is tricked into giving He-Man a present that contains a cloud of dust that puts He-Man and Battle Cat to sleep. That's what's happening in the exact scene this cel is from. Later in the episode the Widget rescues He-Man from Skeletor with the help of Teela and Orko. The littlest character is the hero  of the episode. 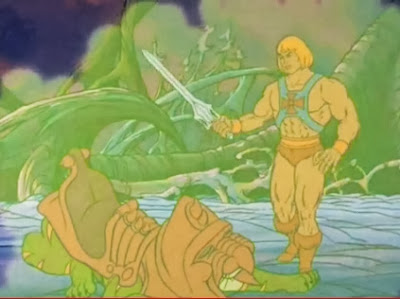 Bonus Cel! Here is a stock cel of Cringer. This green and yellow tiger is the cowardly pet of Prince Adam who can be turned into the ferocious Battle Cat with a Power Sword and a few magic words. This cel is labeled as a Stock cell which means that when they were creating the show, artists created artwork of the main characters doing common tasks like walking and talking. The Story Board Artists were then encouraged to us as much stock animation in each episode as possible to save on production costs. This cel of Cringer may have been used in dozens of episodes. 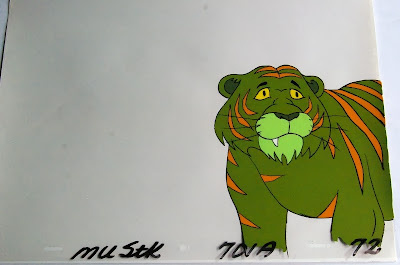 Both cels that appeared in today's post are cels I accumulated over the past couple of years. Once I framed and hung  my favorite cels I donated most of the remaining art work to the Toonseum in Pittsburgh Pennsylvania so that others can enjoy the artwork. I hate to horde this kind of stuff if I can't display it. No one gets to enjoy it's stored in a box under my bed.