Leatherneck was the GI Joe teams 2nd Marine. He is dressed in green and brown camo uniform. His cap has the Marine Corp. logo on it. Leatherneck came with a green backpack and a gray gun with a grenade launcher. His face is based on Hasbro Designer, Ron Rudat. Leatherneck's card art looks even more like Ron than the toy's face sculpt. 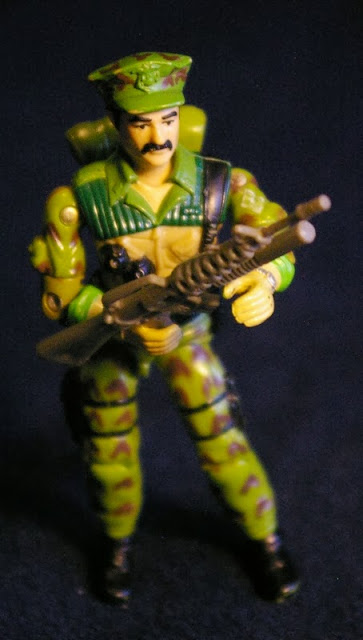 The rivalry between Leatherneck and Wetsuit (Marine vs Navy SEAL) was one of my favorite things about the 2nd season of the GI Joe cartoon. They were always busting on each other, but in a fight they were true brothers. I bought Leatherneck at a yard sale when I was a kid.
Posted by Buzz Chuck at 9:09 PM