Along with the Arkham Asylum 2-Pack I recently reviewed, I also received the Arkham Origins Bane figure. This toy is based on the third video game in the series. Origins is a prequel of sorts. For this appearance, Bane's design is much more influenced by his movie design. Bane is wearing military style webbing gear and combat boots. His stature is also not as beefy. 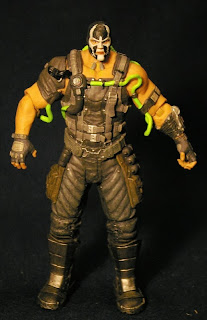 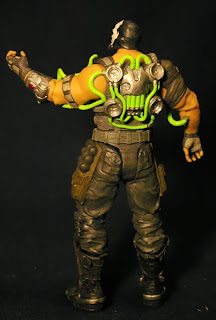 Bane is wearing a venom backpack that has bright green tubes that attach to different parts of his body. While this figure displays well, his articulation on the other hand is lacking. The tubes make it hard to move his arms. He has a grenade on his one leg that makes it impossible to move his one hip. I know these are for adult collectors, so they don't expect people to play with them, but I like to be able to pose my figures. Articulation is often an issue on these DC Collectables. 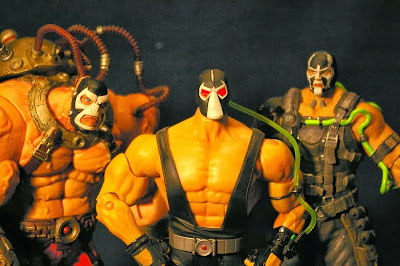 Here's a great shot for the family album: The Bane Brothers
Posted by Buzz Chuck at 9:30 AM