Terror Trash Ghost is part of the Haunted Humans sub-line of Kenner's The Real Ghostbusters. He's dressed in an orange outfit and has a gray trash can in his hands. Because of his action feature, the Trash Can Man has very little articulation. In fact his only real joints are at his shoulders. This toy always reminded me a little of the Trashman character from Sesame Street who carried Oscar the Grouch around. That character was created to allow the puppeteer to walk around and still operate Oscar in front of him. 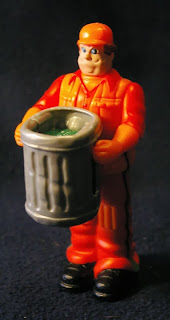 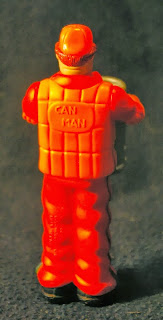 Anyway, back to Terror Trash Ghost can transform from the Trash-man into  a grasshopper like insect. The trashcan flips over his head. The Trash-man's head pushes the bug head out of the bottom of the can. An insect mandible pops out of the man's stomach once the can is out of the way. Translucent green wings fold out of the man's legs. He's creepy I guess, bu not very ghost like. 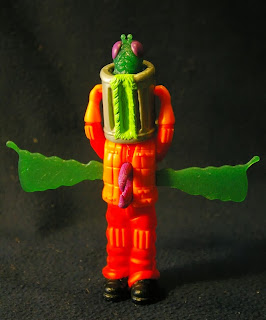