Thunder is probably one of the most forget GI Joes from the early days. He was packaged as the driver to the Slugger. Thunder wears a brown shirt with black pants. He has a green vest over his shirt. He came with a three piece helmet and a monocular. Thunder's helmet consists of the standard early Joes helmet with a snap on visor and headset. His head and helmet were later reused for the Tiger Force character Skystriker. 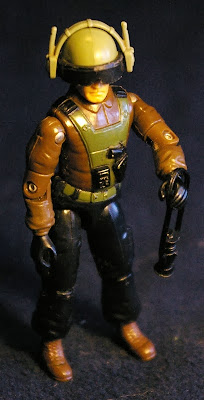 Hasbro used such an odd reddish/orange for all the gingers on the Joe team. It's hard to take a figure like Thunder or Charbroil seriously with that red hair. His vehicle is a self propelled cannon so his monocular must be for spotting targets far way. I'm surprised they didn't pack him with a calculator accessory so he can figure out the trajectory at which he needs to fire the Slugger. 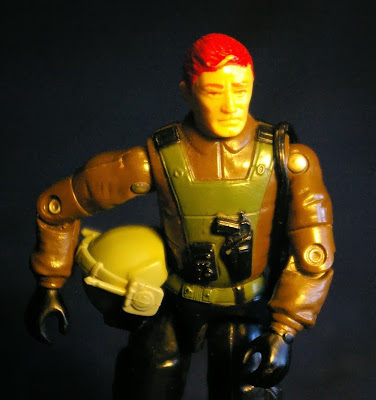 Thunder has kind of a generic sculpt. This makes his arms and legs decent for making custom figures. I used his legs for a couple figures over the years. Thunder never got a lot of screen time in the toon or very many panels in the comic. As a kid I felt like we was kind of like Steeler and Short-Fuse jammed into one character... and so not that interesting.