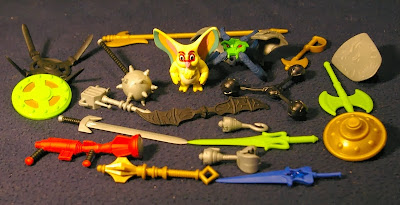 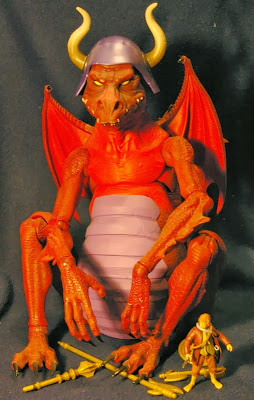 The End of Wars Weapon Pack is the third and final weapons pack to be released for the Masters of the Universe Classics line. This weapons pack is made up of recolored weapons, new weapons dropped for figures in the line, and an all new Kowl mini-figure.


The set came with several gold weapons that can be used as treasure for Granamyr. They could also be used to give Lt. Spector some flashy Palace Guard Weapons.


Watch out Granamyr, it looks like there is a burglar in your den. He might try to steal the piles of books you had stacked up in the Filmation cartoon. 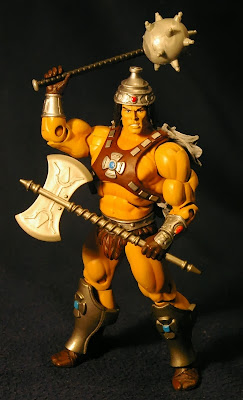 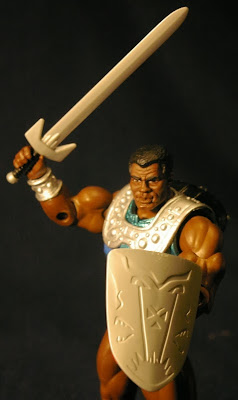 The End of Wars set also included gray versions of Sir Laser-Lot's translucent weapons. His sword and mace are two of my favorite generic weapons that look great in traditional colors. Vykron looks like a real brawler with an axe and mace. Clamp Champ is ready to train some palace guards with the silver colored sword and shield. 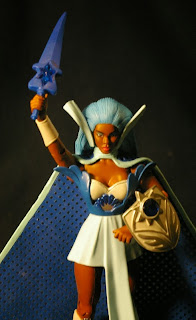 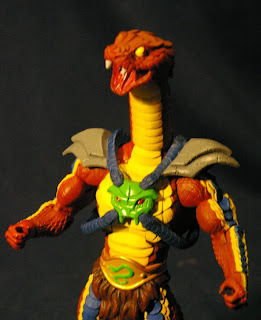 When Netossa was released many fans were upset she did not include a blue version of the Bubble Power She-Ra Sword. Mattel took advantage of this weapons pack to release this weapon to the fans. The pack also includes Rattlor's armor which was dropped from figure because he had so many paint apps, they couldn't cost out the figure to include the armor. 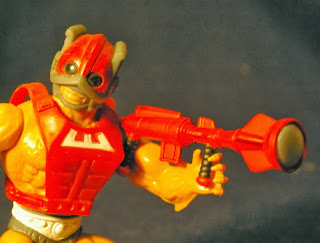 End of Wars also comes with the gun dropped from Strobos, who is this years traveling convention figure. I don't have him yet, and I couldn't find my Classics Zodac so I took this photo with my vintage Zodac. Of course I found my Classics figure as I cleaned up at the end of the photo shoot. 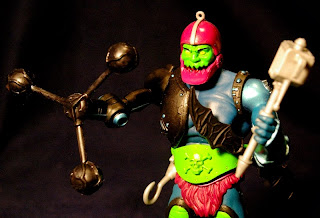 Fans have been asking for repaints of all the different hand attachments for the various figures that have swappable hands. The set includes Trap-Jaw's attachments in gray for Roboto and Hurricane Hordak's attachments in black for Trap-Jaw. I really wish they had included extra hands for mHorde Prime that could be used on Cy-Chop. 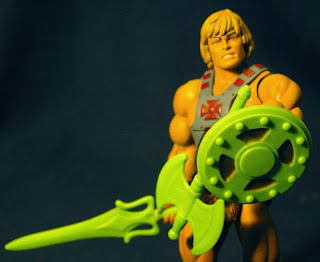 The End of Wars Weapon Pack also came with a set of bright green He-Man weapons. I have no clue what the point of these weapons are. Why green? A rusty brown, gold (like the Granamyr Treasure), black, translucent red, or almost any other color would have been better. These are kind of the duds of the set. 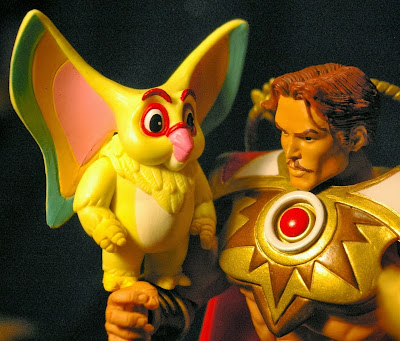 My favorite part of the entire set is the Kowl figure. If you've ever seen the She-Ra cartoon you are familiar with this owl/butterfly creature. Kowl was pink in the cartoon, but his vintage action figure was a creamy tan. Mattel has released him in the cream color now, but I'm pretty sure we will see the pink version since they have the tooling. Kowl has articulation at the neck and shoulders. He doesn't move a lot because his wings/ears don't allow his head to move a lot. As a kid, I really liked Kowl, so I'm excited to have him in my Classics collection.
Posted by Buzz Chuck at 6:29 PM