Today we are taking a look at Dead-Eye Duck. Bucky O'Hare is one of the 90's toy lines I remember seeing in store but never picked up any of the figures. As a kid I was very focused on a few toy lines. I understood that if I wanted a robust selection of characters I needed to focus on one line vs having the main character from a dozen lines. I focused on He-Man & Thundercats. Later I transitioned into GI Joe and Star Wars. When Bucky O'Hare was out I was focused on Ninja Turtles. I always like the Bucky character designs and I pick them up when they are cheap at the flea market or toy shows. 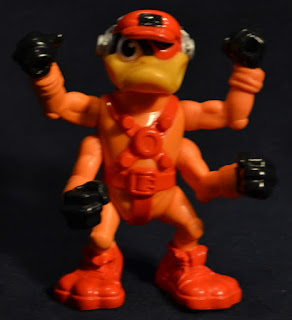 Dead-Eye Duck is a four armed version of Daffy Duck without the speech impediment. He's got a short fuse and is a perfect shot. Dead-Eye is dressed in an orange flight suit with dark orange web gear and hat. He sports silver headphones and an eye-patch. Dead-Eye originally came with one silver gun for each one of his four hands. Since all my Bucky O'Hare toys are second hand, I don't own a single accessory.
Posted by Buzz Chuck at 1:10 AM