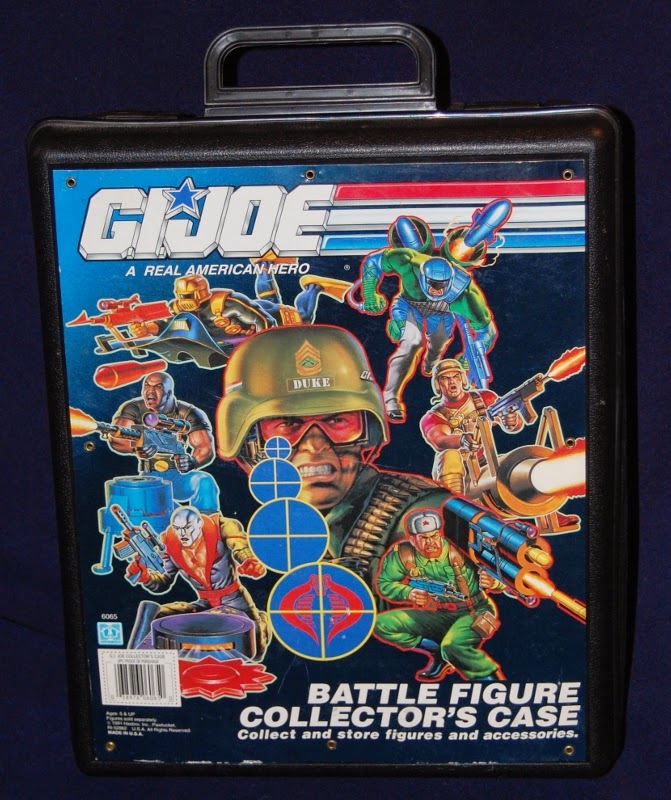 Happy Birthday to the Marine Corps. I've known a lot of Marines over the years including my Grandfather, several co-workers from a couple different jobs, and even one of my former students is currently in the Marines. Thanks for your service to all the Marines out there. I'm gearing up to support your annual Toys for Tots Drive.

Sunday was the third New Jersey Collector's Con of the 2014. I ended up buying a ton of Marine action figures. I didn't set out to do that, they just fell into my lap.I walked by the GI Joe figure case pictured to the right several times without paying much attention to it. Then later my friend Nick was looking at it and I walked over and asked him what he was looking at. Nick showed me there was some impressive stuff inside and told me what the guy was asking for the lot. I couldn't leave it there. 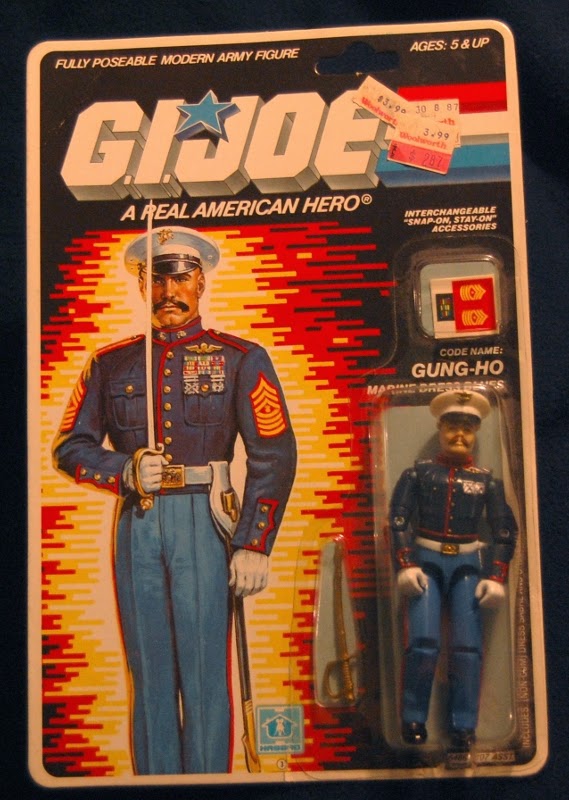 Gung Ho v2 (Marine Blue Dress) on a beautiful card from 1987. I don't have a ton of carded GI Joes, but I do enjoy looking at the card art.

This figure is one of the least action oriented figure in the 3 3/4" scale line. What do you use this figure for? Parading around the grounds outside GI Joe HQ?

He's a great representation of the official uniform. I still remember my Grandfather telling me that you had to buy your own sword and that's why he didn't have one.

I didn't have this Gung Ho as a kid, but he must have stuck out like a sore thumb in many back yard adventures.


I picked up two carded samples of the Gung Ho v3 from 1992 as well a one Gung Ho v4 from 1993. Both of versions of Gung Ho use the same mold. They have different paint schemes and different accessories. I always hated the fact that Gung Ho's tattoo became much smaller on this figure than the original. 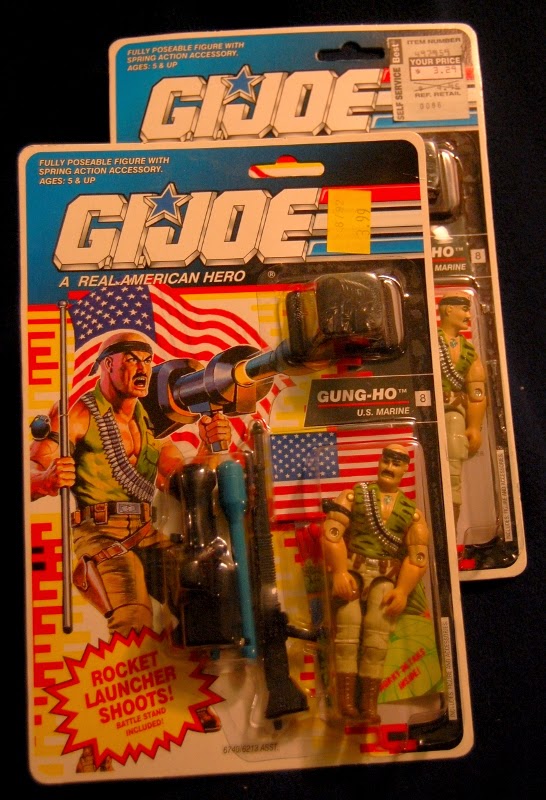 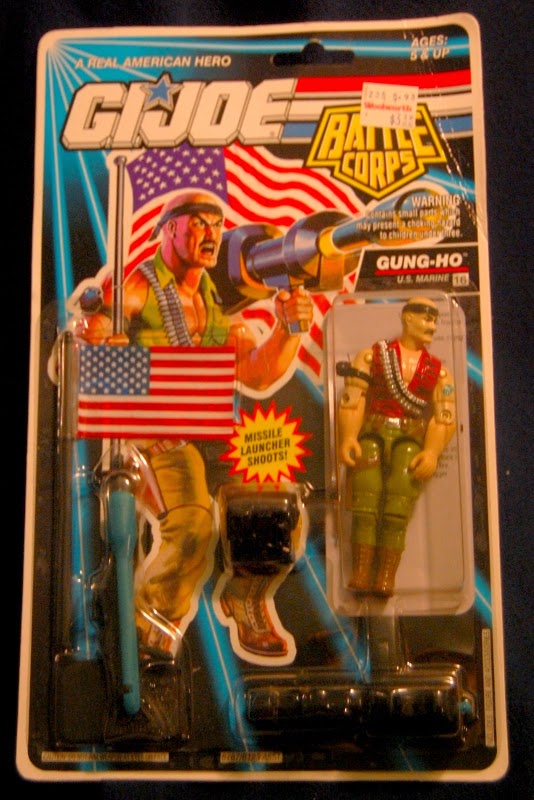 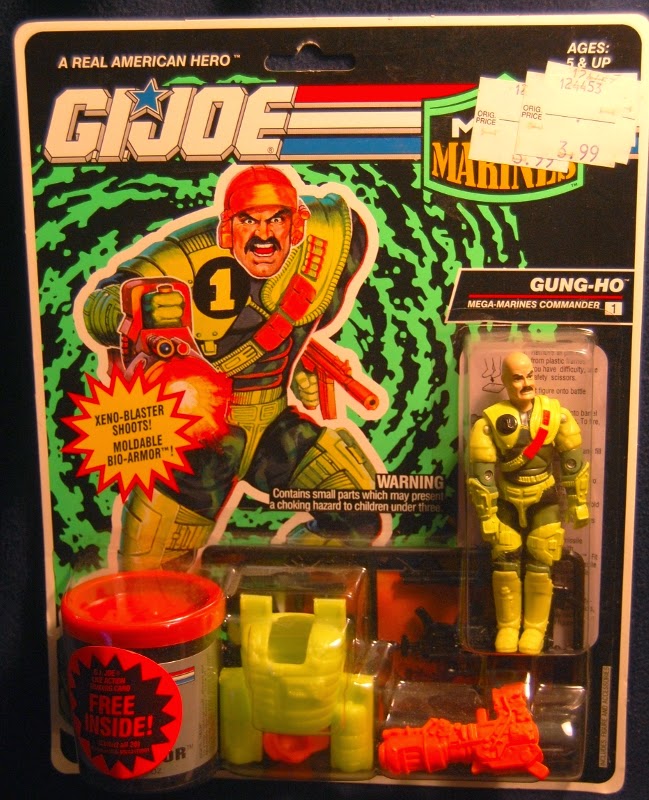 The case also included a carded Gung Ho v5 from 1993. This is Gung Ho as the leader of the Mega Marines. I remember seeing these guys hanging on pegs after I was kind of done with toys as a kid. I used to hang out in the toy isles while my Mom shopped at stores long after I was actually still buying new toys to play with. The play-dough armor was an interesting idea.

Hasbro was really trying hard at this point to compete with Ninja Turtles. It resulted in bright colors and wacky features even though some of the figures had great sculpts. 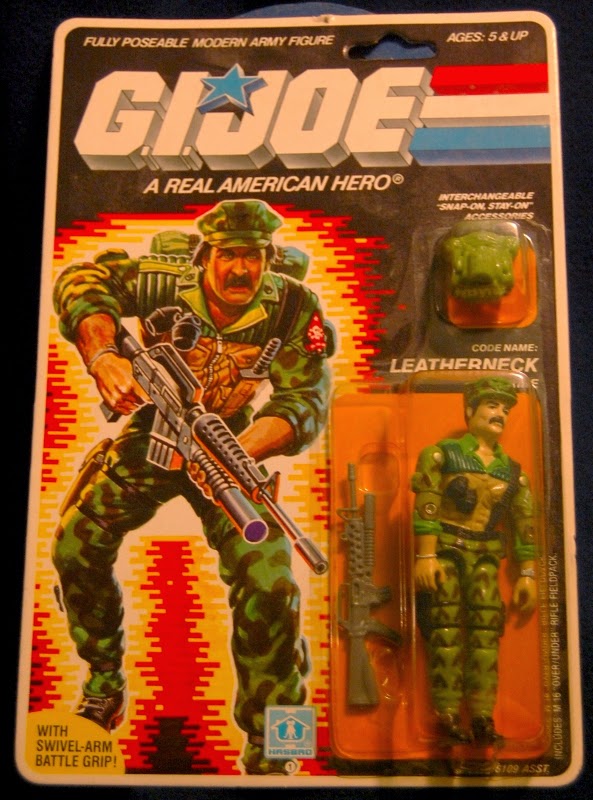 I saved the best for last, but I also got a carded copy of my favorite GI Joe Jarhead, Leatherneck. I love the 1986 line of GI Joes.

The 2nd season of the cartoon show really cemented these characters in my heart. Leatherneck, Wetsuit, Beach Head, and Sgt. Slaughter were some of my favorites as a kid.

The card art for Leatherneck v1 is based on Ron Rudat who designed many of the GI Joe characters and vehicles.  It's funny that Leatherneck has Ron's face and Dusty has Ron's file name.

The  case also contained four loose figures. Again all these figures were Marines. Gung Ho v1, Sgt. Slaughter v1 and v4 and Leatherneck v2. All four are in great shape, but without accessories. I almost have to assume the person that owned these before me was a Marine. One interesting thing to note is that Mainframe is also a member of the Marine Corps but his action figure doesn't scream Marine like the other do. 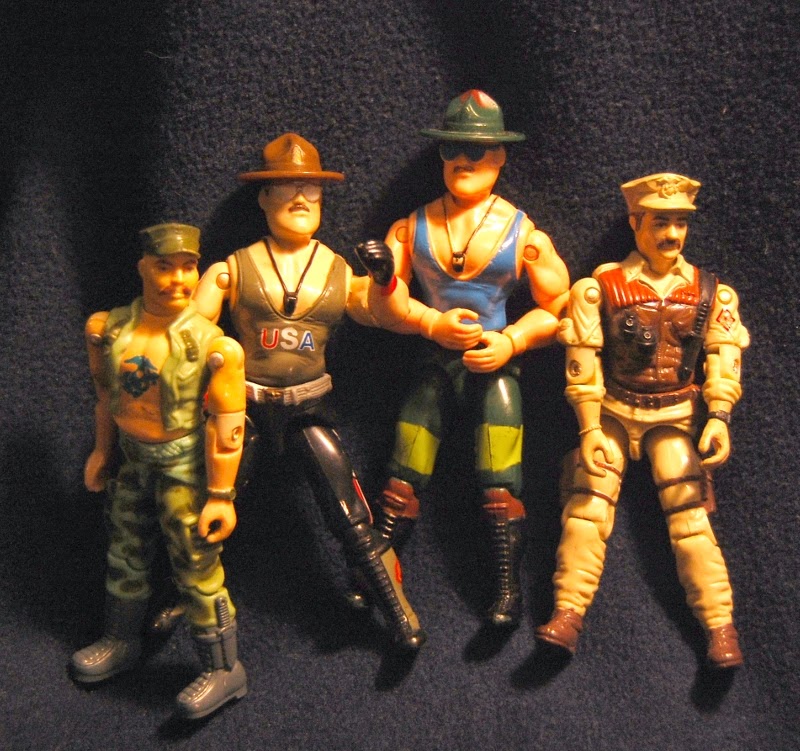