I posted a few photos of my purchases from New Jersey Collector's Con, but I also have a few photos I took at the show. The first photo I wanted to share is of a Terrordrome and Defiant Space Shuttle. The vendor also had a USS Flagg sitting right next to the shuttle, but I didn't get of photo of it. It's funny that i was so excited, since I own all three, but to see the three Holy Grails in a row was kind of mind blowing. 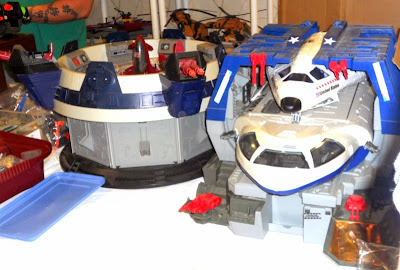 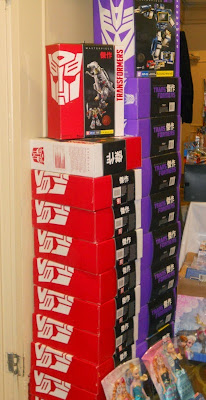 The vendor who had the amazing GI Joe items also had a box to the Aircraft Carrier and a box to the Shuttle. I had never seen the box to the Space Complex in person before. It is huge. The Flagg's box is big in two directions, but isn't very deep. The Defiant's box is like an huge cube.

This photo is the 2nd most insane thing I saw at NJCC. I could not belive that anyone had this many Master Piece Grimlock and Soundwave figures. These figures are crazy expensive and pretty hard to find.

I don't really know if they moved many of them,  but I saw a lot of people looking at them. I have Soundwave, but not Grimlock. I'm not really a big Transformer Collector, but those figures are incredible.

The funniest thing was that in addition to all the Master Piece Transformers the guy had a bunch of Frozen Dolls. 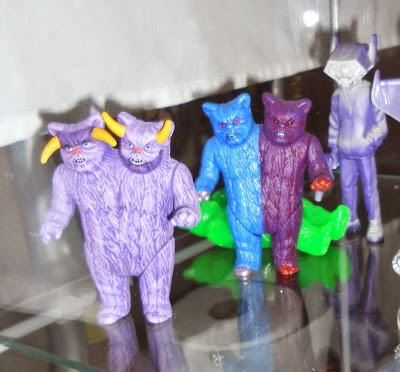 The last three photos I have are of the awesome custom figures that were on display at the show.

Previously I posted about the Two Bad (Masters of the Universe) themed Ewok figure.

In addition now they had an Ewok figure based on the two-headed monster from Sesame Street. I wonder if he made a mold after he combined the initial two Ewoks. 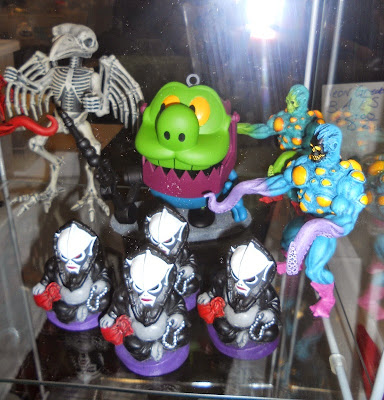 I do belive I previously posted about the little Buddha Hordak figures. Nto only is Kevin Watts great at sculpting, but his painting is superb.

I don't know how he made that bird skeleton, but that this is incredible. I wonder if it has any articulation. 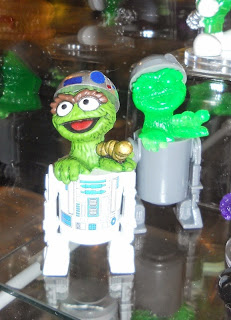 The last photo I have to share is a cool Oscar the Grouch / R2-D2 Mash-Up. I looks like he made a mold off the vintage R2 and an Oscar PVC figure.


I just think it looks great. I like that he had a blank slate as well as a fully painted sample of this figure.


As usually I had fun hanging out with my buddy Nick and Meeting up with other collector friends. Kevin B. and Mike B. to name a few.
Posted by Buzz Chuck at 9:51 PM