Wild West C.O.W.-Boys of Moo Mesa was a line of toys released in 1991 by Hasbro. The series was also made into a cartoon, which had a different design ascetic. The toys were chuncky and hunched over similar to the Ninja Turtles. The Cowboys in the show were much slimmer and more humanoid in proportions. Here we have Cud, a purple cow-boy wearing a black vest, red hat, and a gold belt. He originally came with a pistol. Cub originally came with a knife and a pistol, but I bought this figure loose at a yard sale. 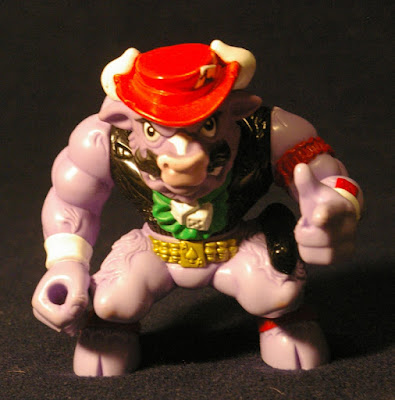