The Cylon Raider was the bad guy fighter ship from the late 70's TV show Battlestar Galactica. The green UFO with black center stripe and yellow outer stripes is a fun toy. The outer edges of the "wings" could extend to expose small red spring-loaded missiles. The black area in the center is actually an opening cockpit that can hold an included Cylon Pilot (whom I forgot to photograph). 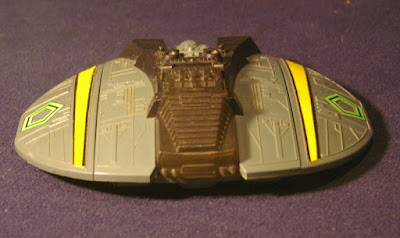 Later the spring-loaded feature would be removed from these toys after a four year old choked and died on one of the missiles from another vehicle from this line. This is what put an end to the Rocket Fire Boba Fett of Kenner Star Wars lore.

I picked this up as a yard sale along with the Colonial Vipers and a few other Battlestar items.
Posted by Buzz Chuck at 5:13 PM