Action Figure Adventures (AFA) is a stop motion animated video series created by a group of college students.  It was intended to be a follow up to their show Animation Creation. AFA is the story of "living" toys trying to escape living in a college dorm room. The good guy action figures have a base of operation on the toy collector/student's dresser. The bad guys are stationed out of his computer desk. The first episode was written and animated about 10 years ago.  Post-production has taken a long time, I know.  While the first episode of AFA was being animated our other series Animation Creation was in post-production. We were somewhere in the middle of the 10 episode Animation Creation series. Action Figure Adventures was written and animated one episode at a time. Once all the episodes had been written we began to cast voice actors and record lines. We waited to record the lines until the end so that way we could record all of one characters lines at once instead of episode by episode. Some characters have lines in every episode, while others only speak in one or two. There are more than 50 speaking characters in the show. Finding and recording this many actors proved to be difficult and time consuming. A few people were able to voice multiple characters for us, but that takes a pretty talented individual. Some characters provided more trouble than others to find voice actors for. Cobra Commander for example has such an iconic voice in the original GIJoe cartoon, so we need someone who could give us a similar performance.

By the time the entire Animation Creation series had been edited Derek was ready to graduate from college, and no longer had access to editing computers. He continued to work on recording voices, but for the most part the show sat. Derek did find a few missing shots needed to do the show, which Kevin then shot. A year later Kevin graduated from college.Derek purchased a Mac and Final Cut pro to edit the show. For a while the pace picked up and a lot of progress was made.

Of course there were some bumps in the road. We still were looking for voice actors and yet another missing shot of discovered. A close up of Cobra Commander was needed for the scene pictured below. 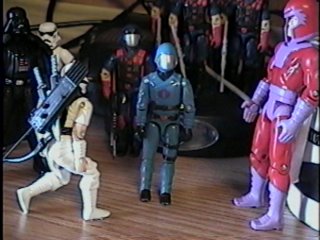 Since Kevin was no longer in school and didn't have access to the dorm some creativity was needed. Luckily you can see that the back ground is mostly obscured by Viper figures. At the time Kevin, Derek and some of the other people involved in the stop motion projects were working on a website called Obscene Newg. Kevin was occasionally adding little production update to a portion of that site dedicated to their video projects. So when he could find his tripod and it was causing a delay in production he posted the following photo to the site. 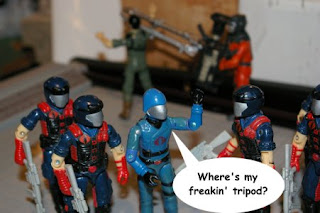 Clutch and Barbeque, two of the main good guys, stealing Cobra Commander's camera and tripod. Eventually this issue was rectified and production continued to slowly move along. Other smaller scale projects took priority from time to time and the guys continued to have issues finding voice actors. One of the last voices they needed was someone with (or who could do) an Australian accent.

Recently Derek has been working on the show feverishly and it should be completed within the week. Hopefully it will be posted to youtube shortly after that so everyone can enjoy it.

In the end the cast of voice actors includes high school friends, college friends, family members, family members of friends, local musicians, coworkers, a group of little kids that are now in middle and high school, and even the guy who owns the comic book shop!