When playing with toys isn't enough...

Sometimes you just have to be the toy. The comic book store that I go to always offers a 20% discount on Halloween if you come in costume. So I usually dress up and pick up my October books that day. One year I decided I wanted to do something a little more interesting than a traditional clothing based costume. I was going to make something big and bulky. The kind of stuff that's cool at cons. So I built the first big suit costume (I'll reveal it in another post), and I had little maneuverability inside the suit. It actually would not have been fun at all to wear to a party, but was pretty cool. The next year I decided to make something that I would be able to move my arms in and walk through door ways more easily. I chose to make an Optimus Prime costume. In college my roommate and I joked about making a Prime costume. He's be the robot and I'd run around in a refrigerator box as the trailer. We never went through with it, but the idea stuck with me. So I built my Transformer costume out of cardboard, Elmer's glue, masking tape, and paint. I wore a red t-shirt and jeans under it. This allows for movement at the joints. I wore it to work that year and to the comic store. Everyone loved the suit and then it kind of got retired. Then one day the next summer my friend Paul (who did a voice in Action Figure Adventures - our stop motion show) called me up and said he was setting up at Zoloworld. He told me to bring the costume because they were having a contest. Zoloworld is a company that makes cases for Mint on Card (MOC) toys and they also do toy conventions. There were quite a few costumed people in the contest including some Jedis and a little kid in a black Spider-man suit from Wal-mart. I had on my Optimus Prime suit and Rose from Retro Screamers Flashbacks was dressed as the Baroness from GIJoe. 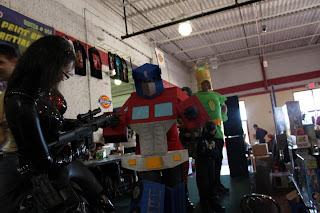 Everyone in the contest had fun being up on stage and posing for pictures. The host of the contest interviewed everyone briefly and made fun of the vegetable knight behind me in the photo. The little Spider-man kid took first place. He was super cute, but the fact that the suit was off the rack was a little disappointing. Rose came in second... all the nerds voted for the chick of course. I walked away with third place. It's kind of funny also because I came in third place at work that Halloween with  the same costume.
Posted by Buzz Chuck at 10:31 PM