DC Universe is a collection of highly detail and well articulated action figures based on the super heroes and villains of the DC Comic book world. They are nice figures, but because there are so many different characters and costumes from over the years it's hard to find any given character in the stores. Most wave also features a larger scale “Collect and Connect” figure. Each regular figure includs a body part to snap together a create another figure. A particular wave recently (Wave 16) caught my eye. The wave featured a number of Batman characters and included the villain Bane as the Collect and Connect figure.

This wave included Robin, The Riddler, Azrael Batman, Jonah Hex, Mercury, and the Creeper. The only figure I really wanted to get was Azrael Batman and of course Bane, but I didn't want to have to buy all the other figures to get him. In a story arc called Knight Fall in the mid 90's the original Batman is injured and retires from fighting crime. Another hero named Azrael takes over his responsibilities and persona as the bat.

Az Bat (as he is often referred to as) was the only figure I couldn't find in stores. I ended up buy Robin and Riddler on sale at Toys R Us (TRU) . A few months went by and all the figures from this wave were out of stores. I came across a store that I don't frequent often and isn't really known for carrying toys, but happen to have most of the wave. They had everyone but Riddler. So I decided to get AzBat and before I left the store I gave in and bought all the rest of the figures I need to make Bane. 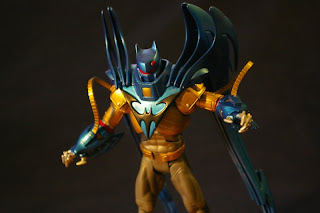 I also picked up an extra AzBat to give to a friend of mine, Doug Moench. The reason I was so interested in AzBat and Bane is because I am personal friends with one of the comic authors responsible for creating and writing the Knight Fall comic arc from the 90's that featured Bane breaking Batman's back and the the birth of a new Dark Knight. The new Knight of course was Azrael wearing Batman's costume and then later his own armored version which is features in this line. Some times they send Doug figures if they are based on his work, but usually it's only if the figure is from a DC Direct line. I have know Doug since I was a little kid. I became best friends with his son at school before I even knew who Doug was. The year long Batman event Knight Fall will always be one of my favorite story arcs. I remember Doug telling us about the idea to “kill” Batman months before the books started. I went to Wizard World in Philly that year and for the first time my Dad believed me that my friends dad was famous when he saw people lined up to get autographs from the guy.

The Batman figure is pretty nice. He has a very complex uniform that is hard to translate to action figure. They did a nice job. His arm movement is a little hindered by the ammo straps to his arms and the armor on his shoulders and around his neck. The claws on his gauntlets are awesome and his cape/wings are pretty cool. They are like semi-hard fins. The DC Direct version of this costume from a few years ago featured a more traditional cape appearance. Sometimes the same costume will appear differently from issue to issue depending on who draws them. Neither cape style is wrong, and I'm not really sure which one I like better. 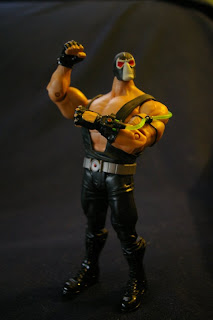 Bane is the first Collect and Connect figure I've ever collected. He's considerably larger than Batman. He have very broad shoulders and is about one fourth taller than Batman. He has great sculpted muscles and his device to pump venom into his blood steam is nicely sculpted and has a flexible green hose that goes from his writs to his head. Perhaps my only complaint would be the fact that both of his hands are closed fists. It's not the end of the world, but limits the figure in certain ways.. He's better articulated than the DC Direct Bane from the DC Direct Knight Fall line, but I like the massiveness of the Direct figure more. 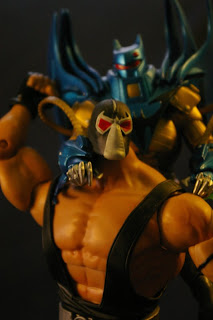 I kept all my DC Direct Knight Fall figures sealed, so these are the only Knight Fall guys I have to pose and play with. I think they did a pretty good job on them. The entire wave as a whole is nice. I'm not really big on all the charters that were included. I kind of wish they were all Batman characters, but the collect and connect gimmick helps Mattel sell figures of DC characters some fans want, but not everyone would buy.
Posted by Buzz Chuck at 7:32 PM