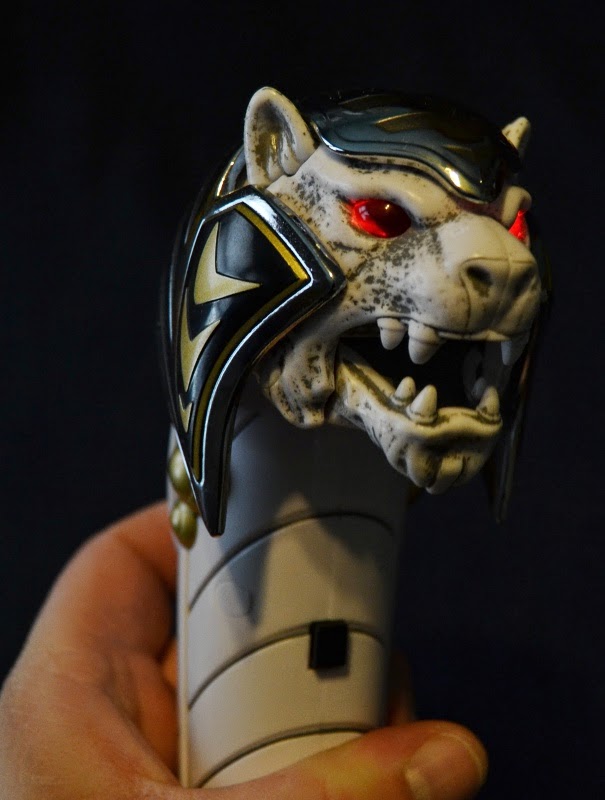 Saba was the White Ranger's talking sword in the 2nd season of Mighty Morphin' Power Rangers. Since Power Rangers is made by combining fight scenes from a Japanese show with footage of American teenagers they eventually ran out of footage of the Japanese robots beating up guys in rubber monster suits. It's not to hard to shoot extra fight scenes for the Rangers themselves, but the giant monster/robots battles are expensive to shoot. So eventually all the Zords (robots) had to be replaced with the next season's robots from the Japanese show. The most popular Ranger (Tommy the Green Ranger) had lost his powers due to the plot of the Japanese show.

So since they were changing robots and the new 6th (special) robot would be all new, Tommy could be brought back as a new 6th Ranger. The White Ranger was born... and it was a pretty good story line for a Power Rangers plot.

As part of the Toy R Us Power Rangers Legacy line we now have a fairly (minus the buttons) screen accurate Saba Sword. Now all the kids of the 90's can act out their fantasy of being the White Tiger Ranger Check out my video review below.