Egon Spengler was the first, and for a long time, and only Real Ghostbuster figure I had. His included mini-ghost, Gulper Ghost, served as both Slimer and and a ghost for Egon to bust. I actually used Gulper as Slimer most of the time when I played even after I had a large collection due to the fact that he was an appropriate size when compared to the Ghostbusters. 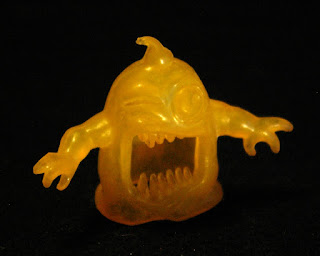 I also liked how you could stick this guy over the heroes heads. I often pretended he would slime the Busters by placing him on them like a helmet. It was fun to see their eyes peak out of his mouth.
Posted by Buzz Chuck at 7:19 PM