The Colonial Viper was the main fighters used by the good guys on the sci-fi show Battlestar Galactica.  These cool three finned ships with long front ends were always a cool design to me. This vintage ship was picked up at a yard sale and came from a collector's sale. The stickers are all in nice shape and the ship is very white. 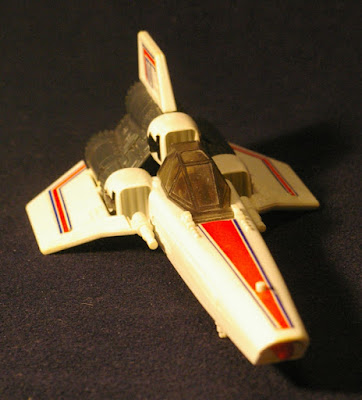 The Colonial Viper includes an opening cockpit, a small pilot figures, and a little spring-loaded missile that shoots out of the nose of the ship. As legend has it a little kid the the late seventies choked on the missile from one f these and died. This resulted in Kenner scrapping the Rocket Firing Boba Fett figure.
Posted by Buzz Chuck at 11:21 PM