The unstoppable Juggernaut looks really tough in this action figure incarnation. Originally packaged with a Chun Li figure as part of the X-Men vs Street Fighter line. I remember seeing these figures in the store after I was kind of over the Toy Biz X-Men line. I really wanted to get the Chun Li figure, but I was at that age where I still thought toys were cool... but wasn't really buying any. 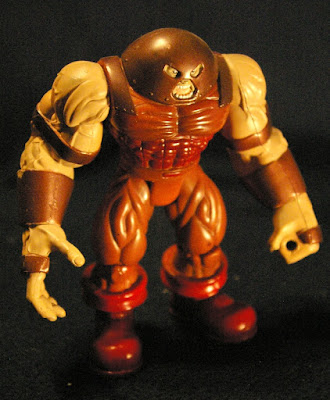 I picked up this Juggernaut at a flea market years ago. He's wearing his normal red armor and has enormous gorilla-like arms. I think he might share some tooling with the figure from the light up weapon series of X-Men, but I'm not positive. I know this torso/head is different because the one from that series has a removable helmet

I bought a 2011 Nissan Frontier (Pick-Up) today, my only Black Friday shopping. Normally I got out and hit up Target and Toys R Us but since the truck had to be replaced due to the accident that was the priority. Now I'm going to have to watch my spending a little more carefully for a little while. I hope everybody had a great Thanksgiving.
Posted by Buzz Chuck at 6:21 PM