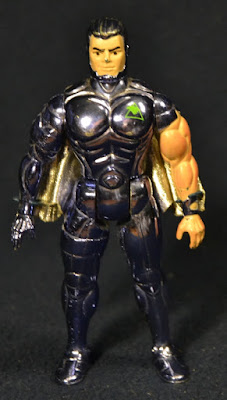 Steelwill, the strong guy, from Silverhawks is another recent addition to my collection. As a little kid I only owned Bluegrass from this series. Later I got Steelwill and Stealhart form a yard sale. I remember playing with them in later Elementary school. I don't know what happened to them. I picked this guy up at a toy show a few weeks ago.

The hard thing about collecting Silverhawks is that the flesh colored paint on them always flakes off the chrome finish. Plus the chrome finish can get scratched up. I think Steelwill is a decent sample... not perfect. He may end up only being a place holder in my collection. We shall see.

Along with the cool chrome finish, Silverhawks also have an action feature that causes their arms (and wings) to spread out when you squeeze their legs. This figures feature works great. I checked it before I bought him. 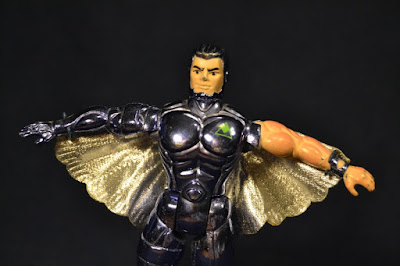 In the cartoon when their wings would come out all the Silverhawk's faces would be covered by a faceplate. This was not worked into the action figures. I think from a design stand point I'm glad they didn't ruin the head sculpts with the goody plates. I do think they should have released all these guys in another wave with different heads that represented them with the face shield on. 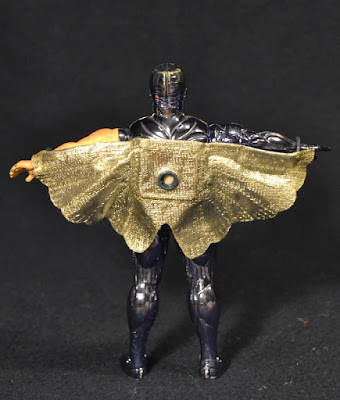 Steelwill's wings are a soft sparkly fabric piece that's attached to his back and clipped to his wrists. I've always been a big fan of the line and the cartoon. I need to track down Steelhart, I'm trying to get the old gang back together.
Posted by Buzz Chuck at 8:11 AM

Email ThisBlogThis!Share to TwitterShare to FacebookShare to Pinterest
Labels: SilverHawks