Power Arm Terminator is one of the T2 variants of the title character of an R rated movie turned into a toy line for kids. This figure looks a fair amount like Arnold in the second Terminator film. He's got his back leather vest (was a jacket in the film) and grenade ammo belt. This Terminator sports a lot of battle damage on his face and one arm. 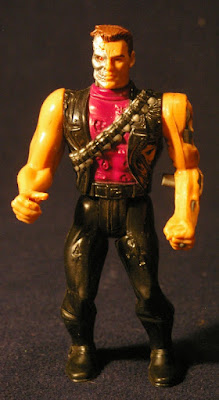 Power Arm Terminator's action feature is that he has a removable arm that can be changed with a couple of other robotic appendages. His "normal" arm features a rod that can be extended from his fist that kind of looks like he's giving us the finger. I can't figure out what the point of this feature was. It reminds me of Robocop's data spike. 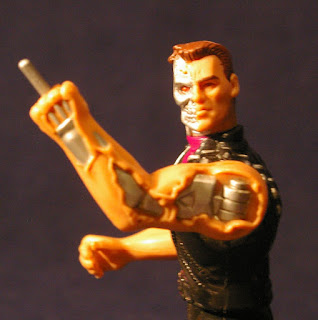