Wheeler was the American member of the Planeteers and spoke with a New York accent. He had the power of fire and was the second element in order to call Captain Planet. The action figure did a great job of capturing the likeness of the cartoon character. Wheeler has reddish hair and wears a leather coat, a Planetters t-shirt, gray pants, and sneakers. Molded onto his right had his his fire ring. 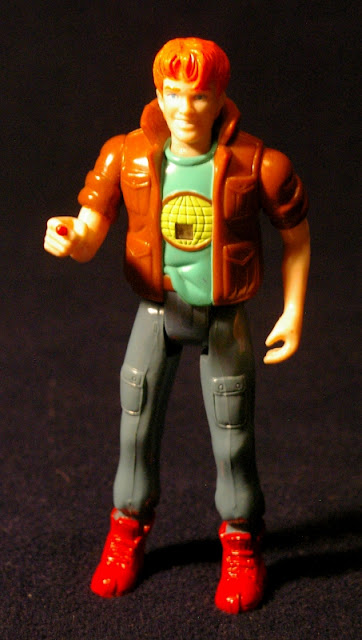 The only accessory that Wheeler originally came with was a role-playing fire ring for a child to wear. He also has one built in action feature. If you pull the lever on his back his chest sparks giving the illusion that he's using his ring's powers.

I was in a car accident last night that probably totaled my truck. I was coming back from the office where we film many of the SEO Toy Review videos and a guy made a left hand turn right in front of me. So I'm kind of bummed out that I'm probably going to have to buy a new vehicle and all the hassle that goes along with this right around this time of year. The good news, both myself and the other driver are fine and will be able to enjoy Thanksgiving in a few days.
Posted by Buzz Chuck at 10:31 AM