How rare are packaging errors? Once in a while I hear about them, but never really see them. In fact the only one I had seen in the MOTUC (Masters of the Universe Classics) line before this was a Grizzlor I ordered from ebay. The MOTUC logo was placed in the bubble of the packaging upside down. I didn't take a picture of it, because it wasn't really all that interesting. I actually got Grizzlor pretty early on in my collecting. The packaging error was the least of my concerns I just wanted to open him up when I got him.

Anyway, flash forward... I ordered a Battle Armor Skeletor from Matty Collector recently when we has being reissued and he came with a much larger packaging error. 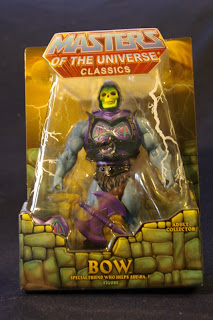 The paper at the bottom of the bubble that identifies the character is incorrect. Instead of saying Battle Armor Skeletor this figure is labeled as Bow (a She-Ra character also in the line). Is this a new Quarterly Variant Figure? Bow in Bad Guy Disguise?

The other interesting thing about the Bow label is that it does not have an “original” burst on the packaging which means the paper, or possibly the entire figure is from the first run of figures and not actually a reissue figure.

I did some research on Matty Collector to see when the figures were originally released. I mostly wanted to find out if they came out on the same month. Both figure came out before I started actively collecting the line. Bow is from Feb 2011 and BA Skeletor is from March 2011. They were only a month apart on release, perhaps there were a few extra Bow bubbles laying around the factory or production overlapped.

I placed my order for BA Skeletor in January of 2012. It's strange that the stock laid around long enough for me to get his this much later. Matty hold back a few figures from every production run to replace anything that is received with errors. I guess they hung on to this one a while, and never really looked at him. Oh well. I keep very few of my toys sealed on card. I like to open them up and pose them and display them with weapons in their hands. This one stopped me cold. He's still sealed and I can't decide if I should open him up or not. If you have an opinion leave it in the comments. Is it stupid and who cares, or is it too rare to open?
Posted by Buzz Chuck at 11:03 PM