The Masters of the Universe Classics (MOTUC) Subscription Exclusive for 2012 is Shadow Weaver. This witch is one of the most wretched members of the Evil Horde. The members of the Horde were originally designed as He-Man villains. Then with the birth of the She-Ra toys and cartoon the Horde became She-Ra villains. Filmation, the cartoon company that made the shows for both line actually created the character of Shadow Weaver... and this is her first incarnation as an action figure. 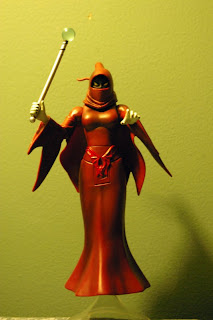 Many fans are upset that the exclusive figure this year was an important character. In previous years the Exclusive was a figure that appeals more to hardcore collectors as apposed to a character all fans would want. I think this was a ploy by Mattel to get more people to sign up for the MOTUC Sub. The Sub locks a member into buying 12 monthly figures, some quarterly variants, and some larger products. One of those larger product this year was a three pack of She-Ra heroes called the Star Sisters. While there are some diehard fans that wanted them, they may have taken the cake as the most hated product in the MOTUC line. Well, this exclusive suckered me into buying a subscription. This figure is awesome and a must have for He-Man and She-Ra fans.

As a kid I loved He-Man and had a ton of the vintage toys. My sister had the She-Ra figure for that line, but that was it. I didn't care for the She-Ra toy line because they were “dolls” and geared toward girls. I remember the She-Ra show better than He-Man because it came out later so I was older. Shadow Weaver and Hordak were both great cartoon villains and were burned into my brain. I used to love when Shadow Weaver would disappear in a burst of flames. I also always enjoyed Hordak transforming (especially into a rocket). I wonder if Shadow Weaver had had a figure in the original line if I would have tried to get her. She really was my favorite character from that show. 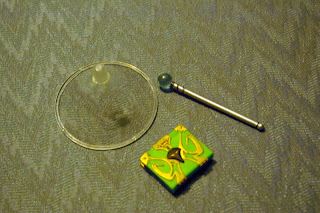 Shadow Weaver includes a clear base, a book, and a wand. The base makes her appear to float as in the toon. The book mimics a magical spell book Shadow Weaver uses in one of the episodes. I don't really recall her using the magic wand, but it's possible that it is also from the Filmation show.
Posted by Buzz Chuck at 8:30 PM