I've always wanted a metal Power Sword for my MOTUC He-Man, and not just a chromed plastic one. So I decided to make a custom sword. After the series of photos of King Grayskull forging the sword below you'll find a description of the process I went through to make the sword. The King Grayskull photo shoot was inspired by the cover of a recent issue of the He-Man & the Masters of the Universe comic by DC Comics. 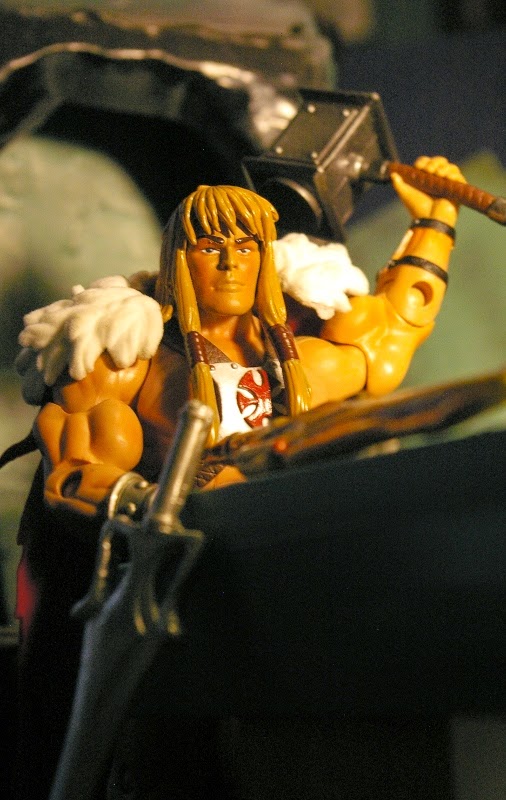 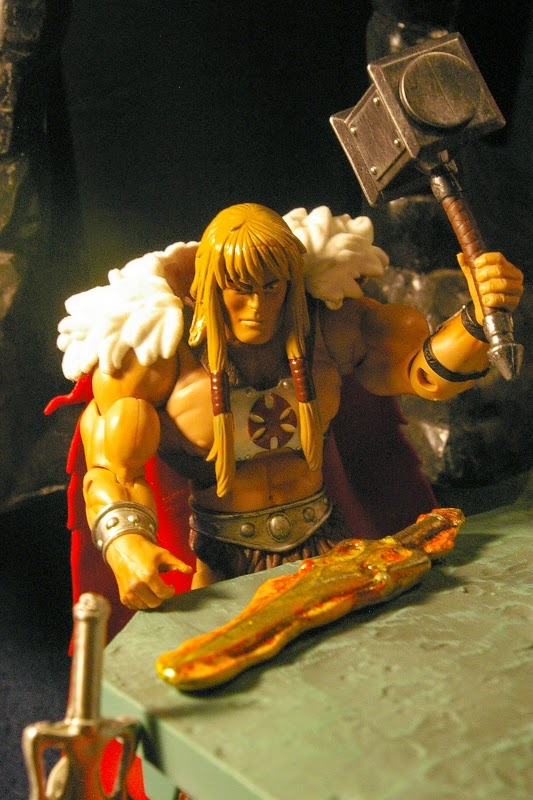 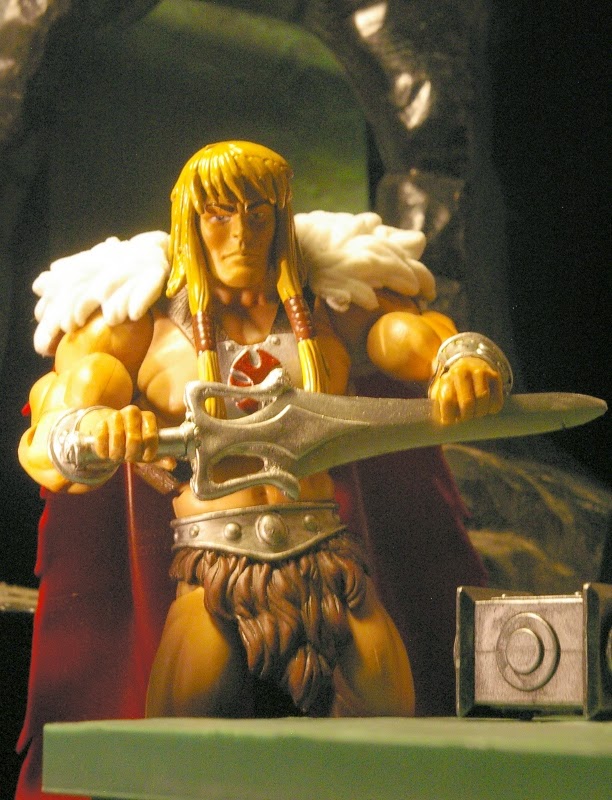 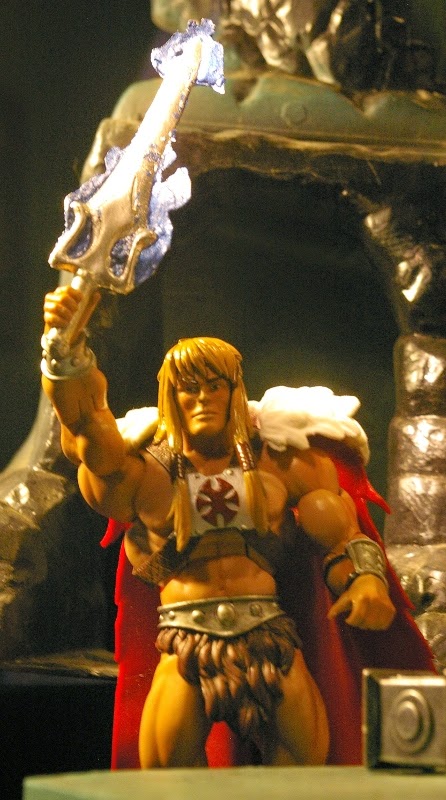 So I have access to a small furnace (melting pot) and other accessories to cast small items out of a lead free pewter. Of course to cast something I need a mold. So I needed an original to make the mold from. I decided to use a spare Prince Adam sword from the Classics line. You can't beat the Four Horsemen's sculpt. So I set up a form of melamine coated boards to contain the plaster. The fours sides are clamped together and caulked to a bottom board. The form was filled with a thin layer of clay and the sword was pressed in half way. (Picture below is without clay) 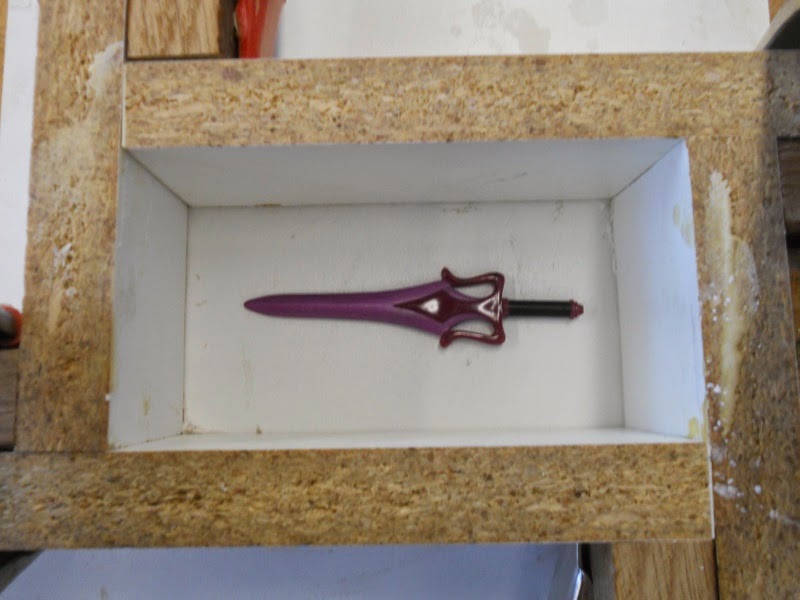 I mixed up a small batch of plaster and poured it into the mold. Then I had to allow it to harden and dry. 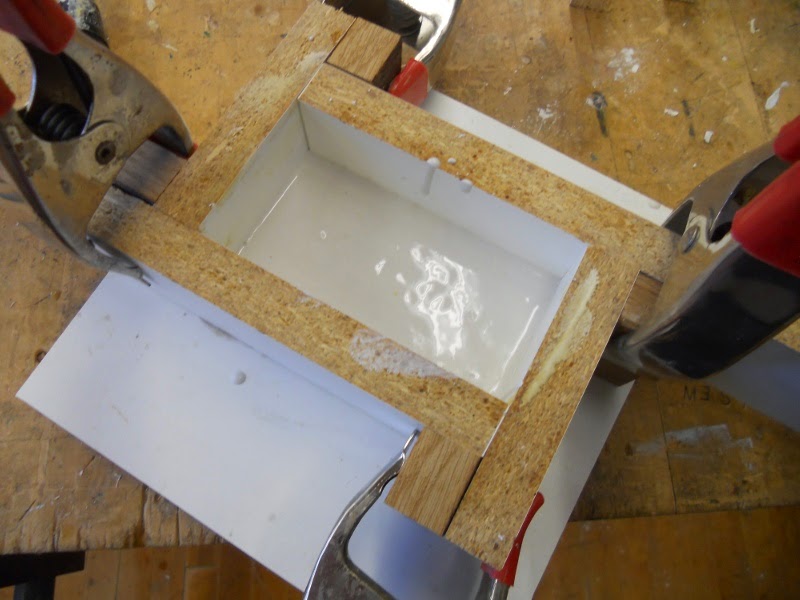 Here you can see the plastic sword in half the mold. This mold is the reverse of the clay that was in the bottom of the form. The  large crater and funnel at the end of the handle were created by large lumps of clay. The crater is there to establish a registration point between the two halves of the mold. The funnel is there for pouring metal into the mold. 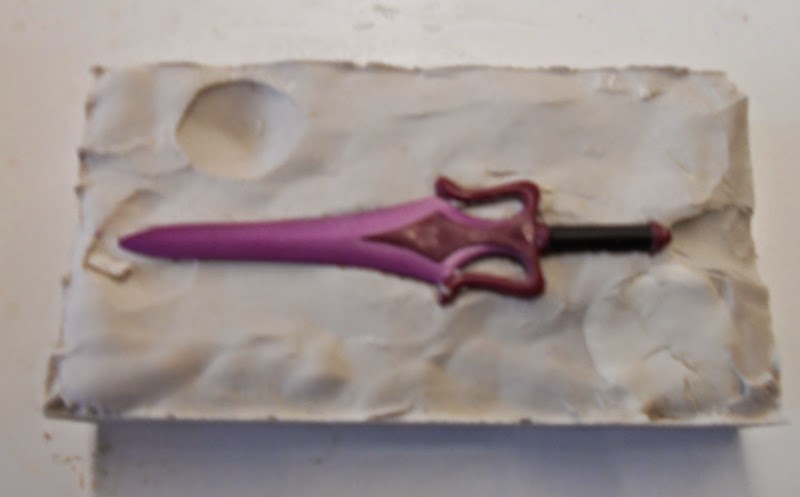 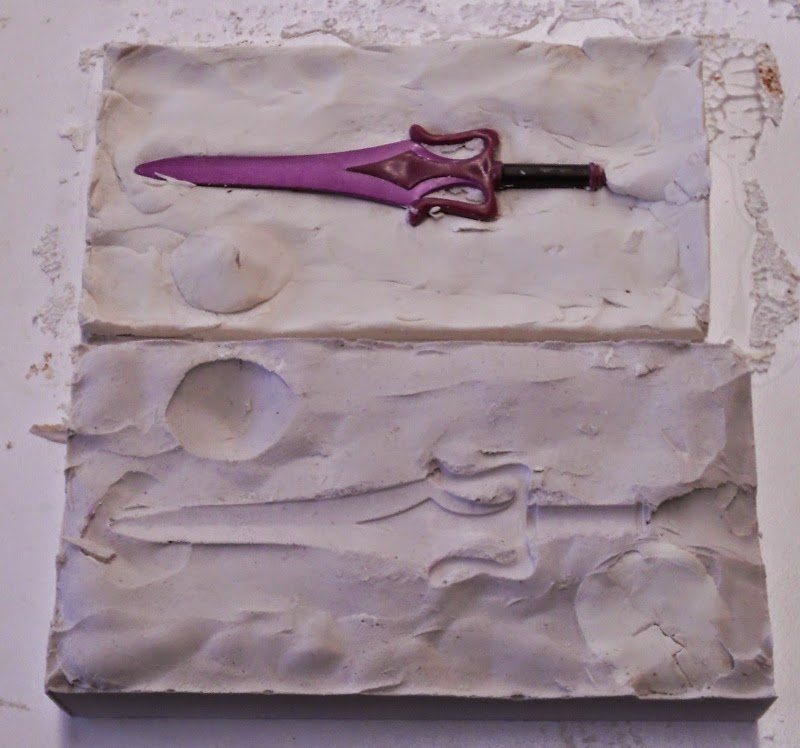 Above is a photo of the two halves of the mold. The high heat of the molten metal cause rapid degradation of the mold. I knew I'd only be able to produce a limited number of swords. After the mold was given plenty of time to dry I began casting swords. In the beginning the swords came out fairly clean with only a little flashing that needed to be cleaned up. Over time, as the mold wore out, the castings got worse and worse. I did get one sword with really interesting flashing that looked like lightning traveling down the blade. I painted the flashing a metallic blue to give the sword and energy effect. After that sword, the mold would no longer hold metal. It just ran out of the bottom. So the last thing I did was pour metal into just half the mold. This sword had a rounded overflow that was painted yellow and orange as my "being forged" sword. I carefullly cleaned up the best two castings of the standard sword and painted up the two forged swords I made. I sent a set to a fellow He-Man fan and of course I kept the one of a kind energized Power Sword.
Posted by Buzz Chuck at 10:25 PM