As I mentioned in Flea Market Finds #3 I picked up an extra 200x He-Man with the hopes of using his chest harness (armor?) on a MOTUC He-Man.  I tried it on him, and it looks great for photos, but doesn't really fit. I couldn't totally clip the armor onto the figure. The straps go through the loops, but they don't reach the little bumps that lock it in place. 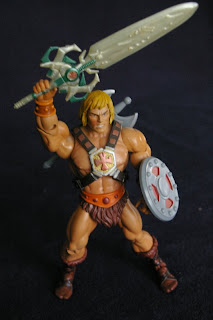 He looks cool though. I'd love it if Mattel would release a 200x He-Man head with the longer hair. Maybe packed in with a 200X style young Prince Adam.

As I was messing around with harness I noticed that the two harnesses were not the same between the two versions of the figure I have. Both came from yard sales, so I don't really know anything about them. The sculpt and paint is exactly the same on every other part of the two figures. 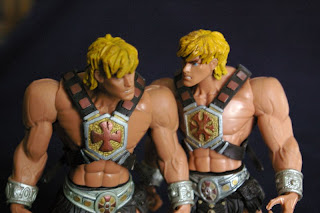 Was Mattel getting crap for having an Iron Cross on the figure? Or did MYP change the chest logo design for the cartoon, followed by a production change at Mattel? I don't know. I was in college during the 200z run and wasn't paying attention to the line. I saw the figures in stores when I was hunting down GI Joe vs Cobra figures, and almost bought one or two but never did. I also caught a few episodes of the cartoon when they were on tv. Let me know in the comments if you have any information about this variation.
Posted by Buzz Chuck at 1:30 PM