I've been a fan of James Eatock's TheHe-Man and She-Ra Blog for a while now, and one of the things he teases readers with a lot is his book, “The Unofficial Cartoon Guide to He-Man and The Masters of the Universe.” By tease readers, I mean that he talks about it but you can't buy it because it's out of print. He's been talking about it getting reprinted, and even has a poll about it on his blog.

Last week when I was at my usual comic shop, Cyborg1 in Doylestown, PA, I noticed they had a copy on the shelf where they keep bundles of clearance back issues. I picked it up right away and was shocked to see it was marked down to five bucks! 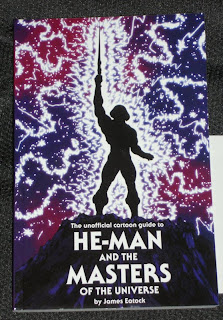 When I when to pay I mentioned to James, the owner, that I had been looking for this book for a while and that it was out of print. He told me it was my lucky day. Someone had asked him to order it a while back a flaked out on him. So I scored a real cheap copy.

I've started reading it. Very informative and interesting. I wish it has a few pictures, especially of the characters created specifically for the cartoon. I understand why they were not included though. He gives an overview of the episode and rates them. He talks about the characters and toys featured in the episode as well as the things I find the most fascinating... reused animation, and the abilities of He-man as he performs new amazing tasks.

If you are into the MOTU cartoon make sure you respond to the poll and pick up a reprint.