I used to have a huge collection of vintage MOTU figures. He-Man was the best in the 80's. As I grew out of playing with toys and started collecting toys I sold off certain toys to buy others. My entire He-Man collection was sold off at yard sales so I'd have cash to by Star Wars and GI Joe figures.

I own a couple vintage MOTU figures that I picked up here and there years after I dumped my collection. I got back into MOTU in a big way since I got my hands on MOTU Classics and the animated show on DVD.

Yesterday when I saw Trap Jaw, Ram Man, Mekaneck with half of his armor, and the chair from Castle Greyskull I had to get them. There were a few other MOTU figures like Zodak, Spikor, and Rockkon but they were all broken in one way or another, so I left them behind. 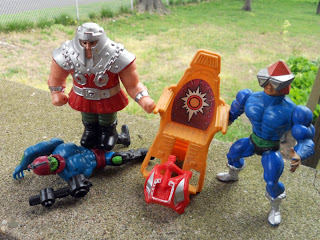 They were all scattered between three boxes of random action figures. I also dug a Ghostbuster and Thundercats toy out of the box. 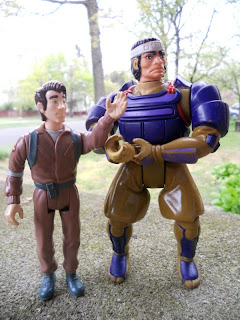 Peter Venkman points out a Class 5 full roaming vapor to Hachiman. I never had the original release of Peter, so he'll look good with my Egon and Ray. Still looking for Winston. Thundercats, like MOTU was a line I had tons of toys from, but when they stopped making them and the cartoon was no longer on, my interest faded and they were sold so I could buy other toys.