Thunder Punch He-Man was offered from Matty Collector as a quarterly variant. This means that he is a previously released character offered with some new parts of equipment. Obviously this release pays homage to the vintage Thunder Punch figure. 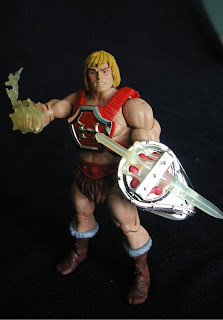 The new parts TP He comes with are his harness / armor, shield, cap ring, closed fist, and punch effect. He also features a much paler complication. He's actually more pale than the Prince Adam figure. 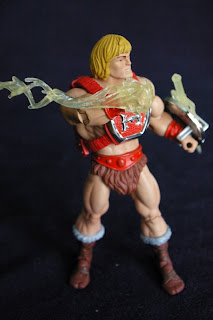 The vintage figure had an action figure that fired a cap when placed in a compartment in his backpack. This was the “thunder” to his punch. 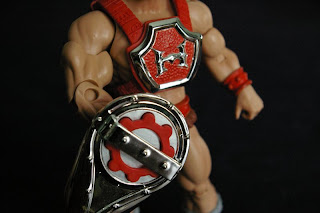 TP He's armor and shield feature vac-metal like his original release. The cap ring (which is fake this time) can be clipped into the shield or placed in his backpack. He also comes with a clear yellow power sword. 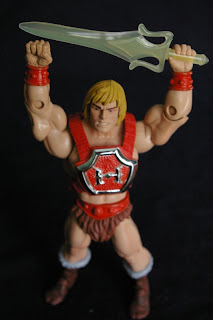 Another slight change between the standard He-Man and TP He-Man is his arm bands. Just like the original Thunder Punch figure, this one features the same arm band on each arm. His armor is also not removable. 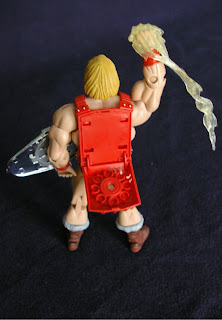 As previously mentioned, his backpack can be opened so you can place the cap ring inside. Since the action feature doesn't work, even if you bought a real cap... I don't really care that the backpack opens up. It's kind of cool, but seems like extra tooling and sculpting that could have been spent on something else, like the weapons we lost from other figures. In fact, I thought there was originally going to be a screaming head for TP He-Man. I'm not sure. I'd have to look for old forum posts and pictures. (I did a quick search online and didn't see anything, maybe I'm going crazy) 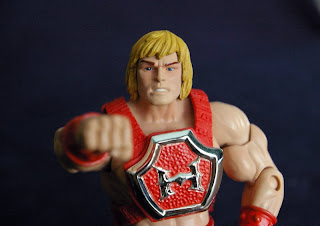 I really like how he turned out, and I was not a fan of the original figure as a kid. The torso on the vintage figure was always weird to me. I enjoyed being able to take a picture where He-Man is punching the screen. It happened during the opening and in several episodes of the Filmation cartoon.
Posted by Buzz Chuck at 3:55 PM