Every crime fighter needs to keep a towel in their utility belt in case  they take a dive while on patrol. This is a Batman bath towel from the late 80's. It looks like the copyright is 1988, but it's hard to read fine print on the fuzzy side of a twenty year old towel. 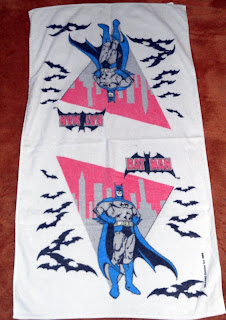 Based on the style and age I'm guessing the art work was done by Jim Aparo. He did tons of licensing artwork for the Batman franchise as well as art in may issues of the comic. I actually got to meet Jim one time and have his sign a few books. That was back in the early 90's. I don't know if the Knight Fall storyline had even started yet in the monthly books... then again maybe it was right after it started. I'd have to dig through a box of comics to figure it out. 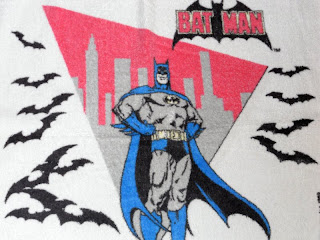 Close up of the artwork on my 80's Batman towel. It's little kid bathroom sized. I think it even came with a wash cloth. It's not a beach towel so to speak.