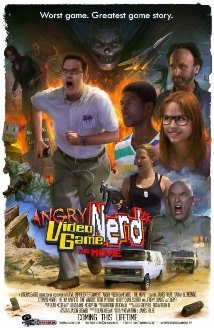 Why am I reviewing the Angry Video Game Nerd (AVGN) Movie? Good question... this is a blog about action figures. I've done write ups on issues of comics on rare occasions here on AFA and today I'm trying my hand at  movie review.

I've been aware of the AVGN for a long time. Even though I'm not really a gamer I have lot of friends who are and being a product of the 80's I've played my share of NES and Sega without owning them. I've also been to shows and conventions where the Nerd has been a guest. Probably six months ago I watched a hand full of his reviews on YouTube of games I always wanted to play, but my friends who owned Nintendos when were kids wouldn't let me play because they "sucked".  Then over the recent holiday break from work I found myself watching a bunch more AVGN videos. They are funny and I love the goofy special effects he adds.

So when I got the chance to get my hands on the Blu Ray of his first feature length film I had to check it out. So while I enjoy his YouTube videos you can tell I'm not a die hard AVGN fan. So I went into this movie knowing a few things. One, I may miss some of the jokes because I haven't seen ever one of his episodes. Two, It's hard to take a one trick pony character from a short format film and convert them into a feature length film character in a story that has to be bigger than anything they've ever done before. The Simpsons for example, awesome TV show. When they finally made the movie, a lot of fans didn't think it worked so great in the longer format. Third, independent movie making is very hard. I've done or helped on a lot of low budget video shoots in my life. Including goofy videos my friends and I made in high school & college, Communication Major's final films, and film festival/contest videos. I've seen a lot of things work and a lot of this come out kind not so great.

With that said, James Rolfe along with is co-writer and co-producers created a full length feature film about the Nerd discovering this crazy Area-51 cover up plot while trying to prove the rumor false that said thousands of E.T. Atari games being buried in a landfill in the desert.

In a normal web episode of the AVGN, he would have explained the history of the game. The he'd play it, point out the flaws, use some creative profanity, and finally destroy the game using some sort of homemade computer graphic which would be cheezy but charming at the same time. 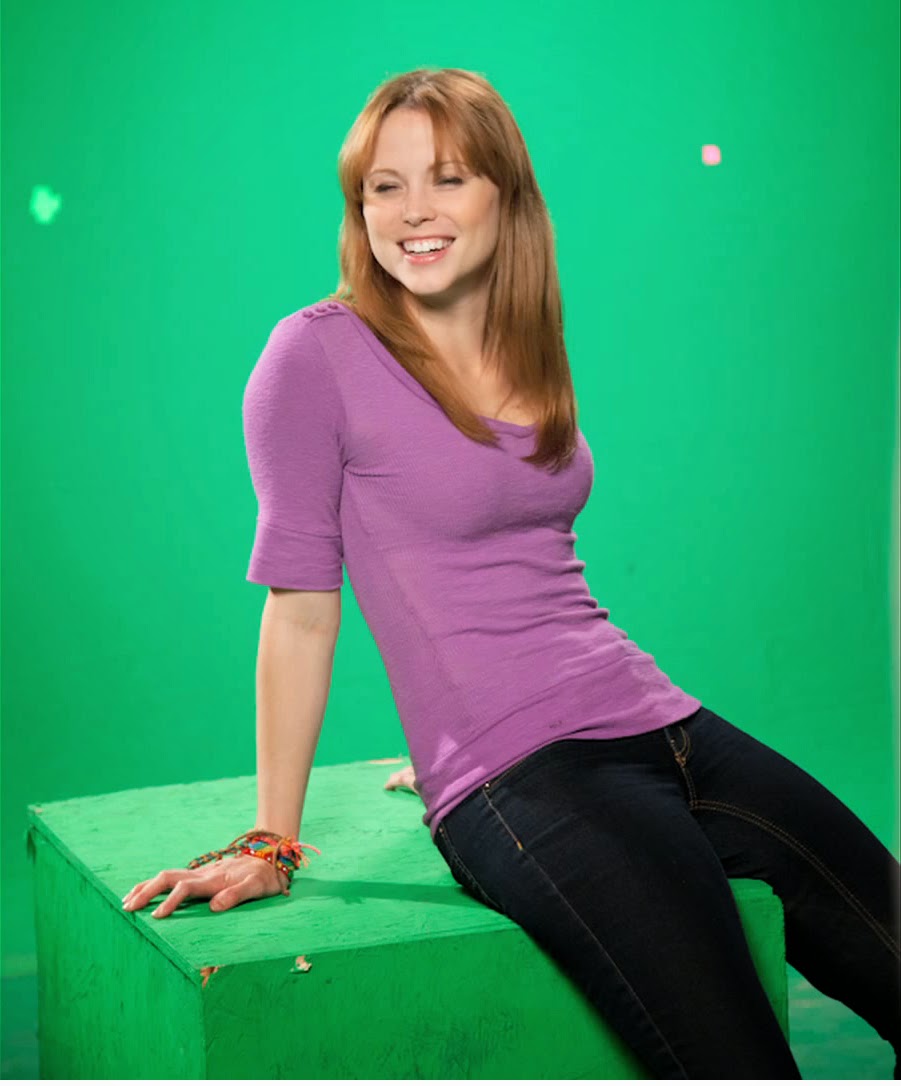 Of course this is a movie so he'd have to go much bigger and he did. Lot of supporting characters and lots of sub plots. There was less video game playing in the movie than a lot of fans wanted, but I think it was the right choice. This was the chance to see the Nerd on a bigger scale adventure. If you want to see him playing video games in his basement there are hundreds of episodes of him doing that online.

The movie was funny and I think had a lot of the key elements of the nerd character. He made funny faces, he played video games, he made lots of 80's pop culture references, and even drank a few Rolling Rocks. In so many of his videos he talks about games inducing vomiting or diarrhea and we got to see one of those things happen in the film.

The Nerd travels in the film with a girl "gamer" and his little buddy/side kick. There is an interesting dynamic between them. Personally Jeremy Suarez, who played Cooper the side kick was kind of annoying, but I hated him as a kid on the Bernie Mac Show first. He was well cast for the role he played, but it was that kid type character that always bugs me like the kid in Iron Man 3 or Short Round in Indiana Jones. Mandi the "gamer" played by Sarah Glendening (pictured above) could have done just about anything in the movie and held my attention. She was actually a fun character because you couldn't quite tell what side she was one.

So the movie involves traveling to the desert to look for the E.T.cartridges which draws the attention of the military. Through this the Area-51 cover up is revealed taking the Nerd in one direction while his friends are off on there own side adventures. I don't want to give to much away but at some point a giant monster is released and he goes around smashing buildings. It's really crazy. The film combines a lot of different special effect styles. There are men in suit, scale models, rubber monsters, CGI effects all sort of mixed together. Practical Effects are fun and challenging to work on in a movie. I think some people may not enjoy them, but they add charm to the film. I know the mouths on the Ninja Turtles suits in the 1990 movies don't sync correctly, but I like those costumes better than the 2014 CGI Turtles. 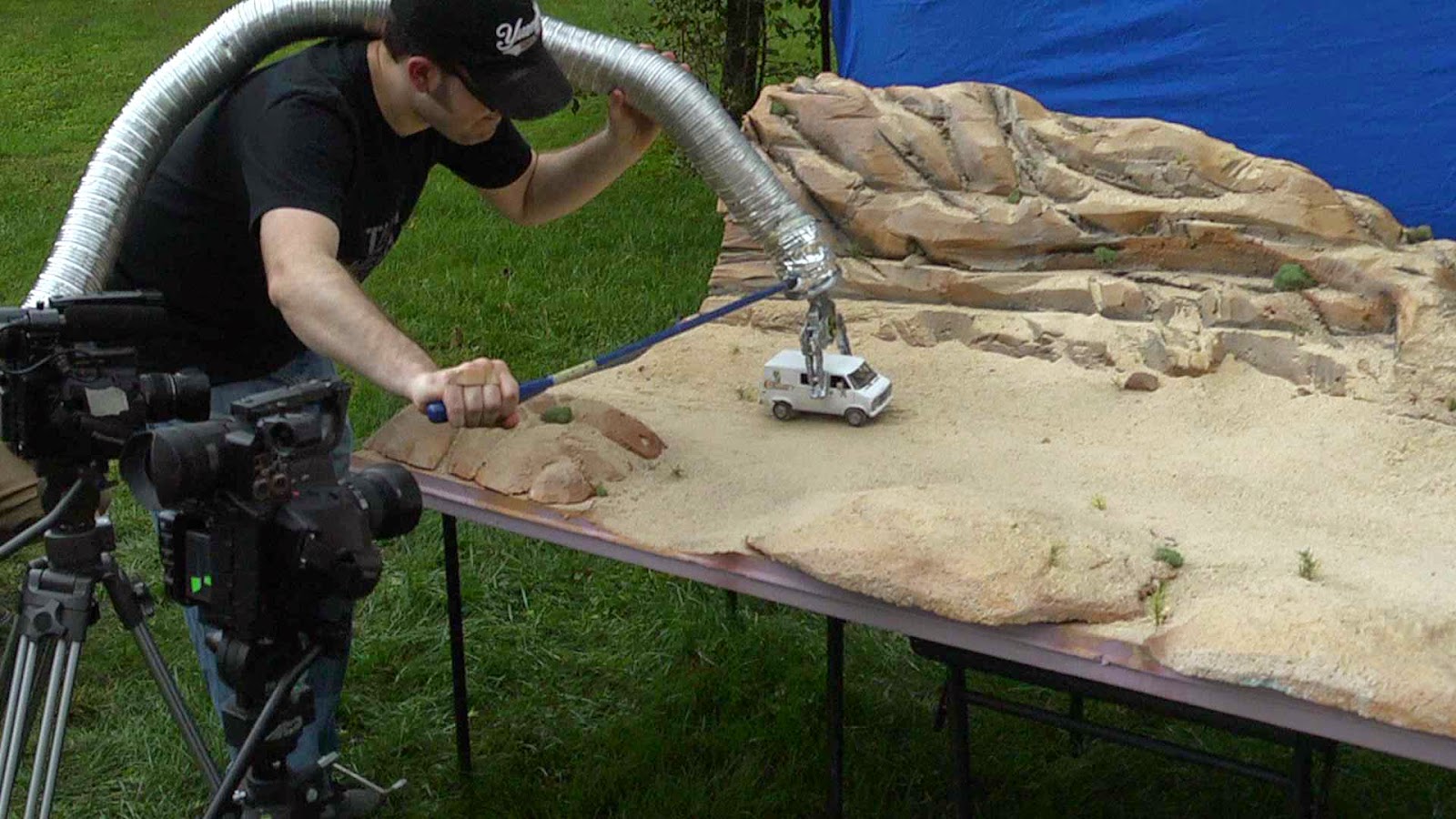 Everyone on the film did a great job building the models, combining the effects and making it just work. The sound track was also really well done. I loved how the AVGN theme was worked into all the key moments.

There was definitely a lot going on in the movie, and perhaps a more streamlined script would have helped. The giant monster guy kind of felt like he was included just in case this was the only feature film James ever made. This way he got to do the monster smashing buildings thing. He didn't have a real big impact on the story even though he was a fun addition to the film.

At the end of the film we get to hear the Nerds thoughts on E.T. which is known as the worst game of all times. I was a bit surprised with what the Nerd had to say, but I guess you can't have a giant adventure and just end with the exact same shtick you use every time. In fact, I didn't think the Nerd was nearly as angry in the film as I expected him to be through out.

The Blu Ray is packed with bonus features, so of which I've watched and others I still need to check out. Over all it's a fun movie. It's not perfect, but look at how much fan hate there is for everything from Star Wars Prequels to half the X-Men movies. I think the people working on the film put a lot of effort in and it really shows. I'd love to sit down with all the guys I used to make movies with from high school and college and watch an enjoy this film with other people who can appreciate what it's like to do take after take trying to make some dumb effect work while keeping a straight face.

I think James should be proud of the film and I think anyone who is a fan of the AVGN will enjoy the film. The Die Hard AVGN fans should enjoy the film as well, but often times the biggest fans have the highest expectations. It's easy to build something up in you mind, which almost always results in disappointment.