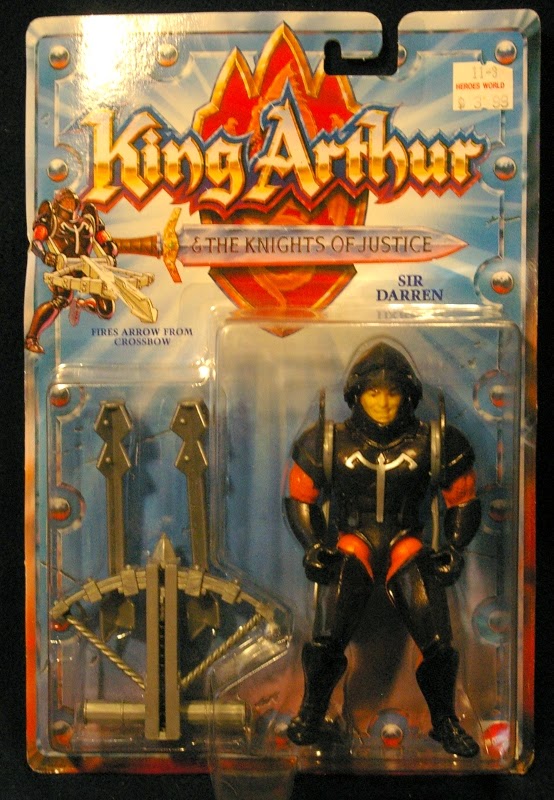 A few weeks ago I found out that Mattel made toys based on a cartoon show I enjoyed in the early 90's called King Arthur and the Knights of Justice. I stumbled upon a few figure from the line at a flea market and then did some research online.

Then last weekend at It's a Toy Show I saw a carded specimen of Sir Darren. I totally remember the dude with a cross bow on his armor. In the show most of the characters weapons materialized out of the armor. Many characters could also call forth spirit animals from their shields as well.

I asked the guy want he wanted for the figure and he actually said he wasn't sure if he wanted to sell the figure. What the hell? Why drag a toy to a show if you aren't going to sell it. I hate that. Then he quoted me a price that was a little to high for my taste. I talked with my buddy Nick a bit and decided to try to get a good price on a package deal later in the show. It worked out and I was able to save a few bucks on Sir Darren, M. Bison, and a toy I will be posting about tomorrow. 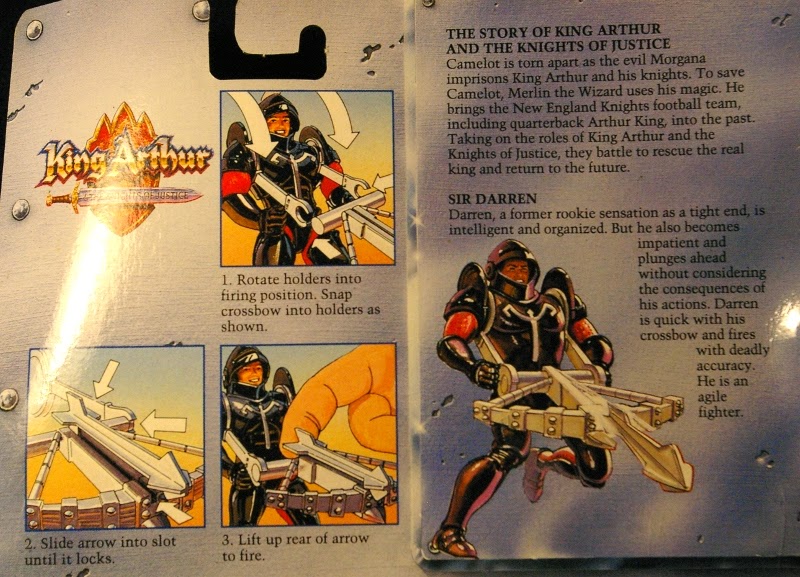 After I spotted Sir Darren, but before I worked out the deal for him I was pleasantly surprised to find Valor the Warhorse from the line in a pile of stuff at a booth where I had bought several dollar figures. I asked how much, granted he's missing parts and in rough shape, but I was quoted a dollar so he had to be mine. 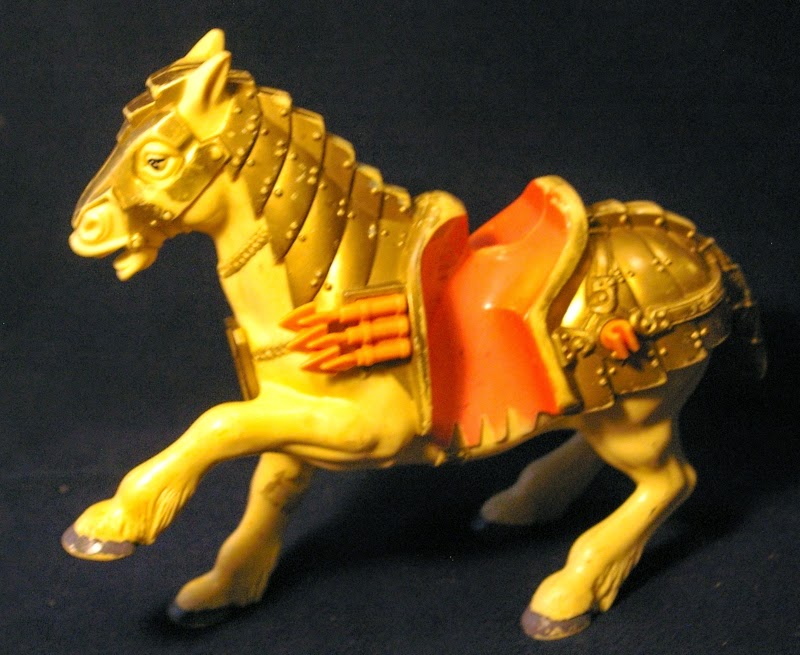 Valor is a bit faded, a but paint worn, and a little bit yellowed. He's missing his helmet, his missile firing lance, and a shield or two that clip to the sides of his hind end. He does have his small arrow accessory on his one side. There isn't a lot of information on this toy out there on the internet. I found a image of his box and a couple of photo of the toy, but no real clear images of everything that he originally included. Down the road I may give Valor a custom paint job to revive this old toy. If I can find another, nicer, Valor I'll paint him a different color completely. Here is a shot of the five figures from the

This image of the card back shows off a prototype of Valor. The arrows and lance are on opposite sides of the horse. You can also get an idea of what his helmet was like. Notice that the Masters of the Universe Slime Pit is pictured here as a future product for the line. I can't find any evidence that it was actually released. 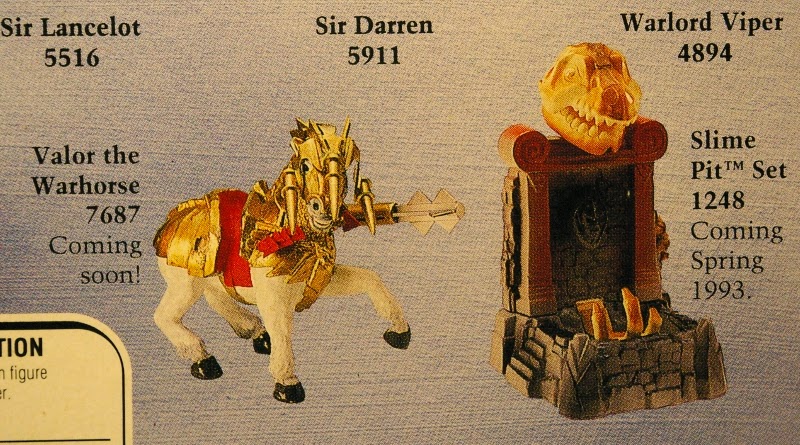 The black sword that came with some of the Archfiend Skeleton Warriors from the Realm of the Underworld toyline look exactly like Excalibur from this toyline, but Arthur's sword was molded in silver. So the King is borrowing a sword from my Zoloworld figures for this photo on his steed. 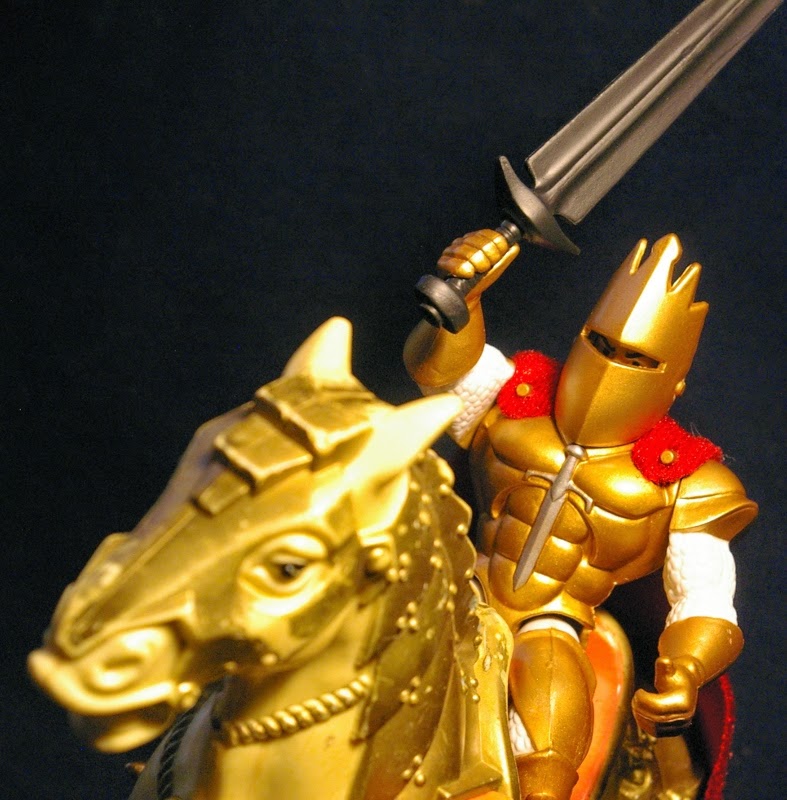 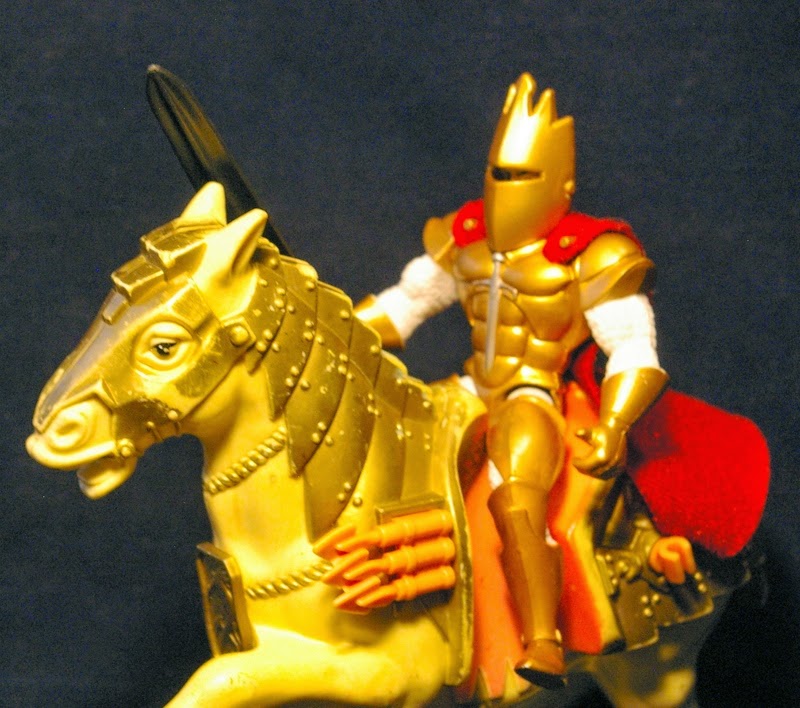