Castle Grayskull is one of the greatest toys of all times. With the release of the MOTUC version at the end of the year I've been thinking about the vintage castle a lot. I never owned a Castle Grayskull straight out of the box in the 80's. Although as a kid I did own five Castle Grayskulls at different times. Like many of my "early" He-Man items, I bought my first Castle at a yard sale. It was first released in 1982 and that was the year I was born. By the time I knew what action figures were there were many of these toys on the secondary market. The line was still in stores, but some of the items had been discontinued. 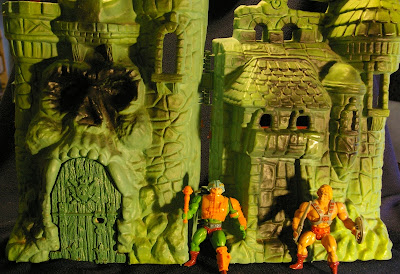 I didn't really know what all the Castle was supposed to include, but when I came across another one at a yard sale with some parts mine didn't have I bought a second one. I then sold of the duplicate that I had robbed parts from at the next flea market I went to. In the 80's my Mom took my sister and me to a lot of flea markets and yard sales. It was a way for us to get toys cheap because we didn't have a lot of money and my mom sold the cloths we had out grown. 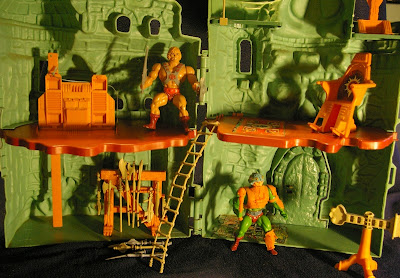 Over the year, as I mentioned I bought five different Castle Grayskulls. The last one I bought had the gargoyle for the elevator rope. I never saw (or knew about) the cardboard pieces to the Castle. Sometime in the late 80's I sold off my He-Man collection when I started to only focus on GI Joe & Star Wars toys. I sold my Grayskull and Snake Mountain (which I did get new). 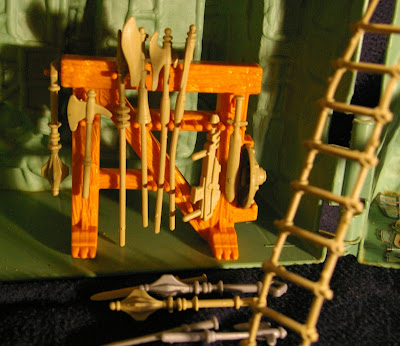 Sometime in the mid-nineties I picked up basically empty shells of both Castle Grayskull and Snake Mountain again. These guys lived in my parents attic for years. Sometime this summer when I was buying lots of vintage He-Man stuff on Ebay I picked up another Castle Grayskull and Snake Mountain. (That's my 7th CG and 3rd SM) I combined the play sets once again and threw in some parts my buddy Paul gave me to create one decedent but incomplete version of both play sets and one version of both with very few accessories. I plan to let my friends kids play with the bare version when they come over.

While all this was going on I noticed some very distinct difference between the Castle Grayskulls I own. As a kid I discovered so variations, but some of these things are new to me. 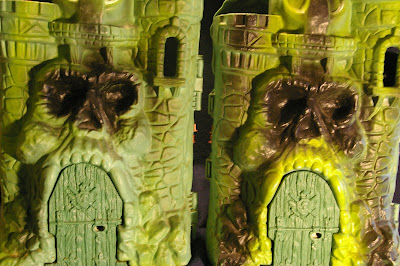 As a kid I noticed that many of the castles had different "paint schemes". What I will refer to as Castle A is on the left side of both pictures. Castle B is on the right. I've always been more of a fan of the Castle A style paint scheme. It features less black and doesn't have the light green. 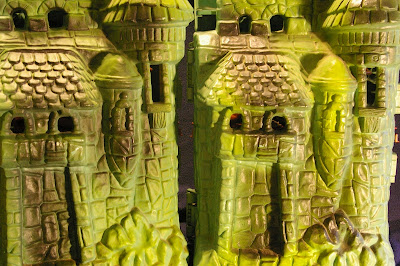 As a kid I came across both version of the laser cannon and tower floor piece. Some version of the Castle has a flat tower floor while others had the version with clips to hold the gun in place. Some Laser Cannons have a closed loop and others have an open loop at the pivot point between the cannon and it's base. I don't know if either of these are only found with a particular paint scheme. I don't have any good data on that. Like I've said, I've never looked at one of the Castles straight out of the box. 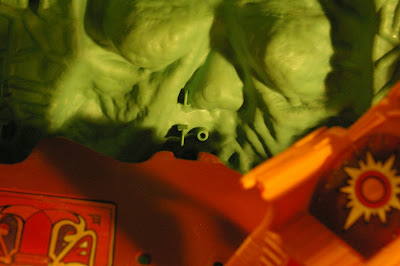 Castle A is pictured above and Castle B is pictured below. Notice the difference in the wall as well as the floor. These floor plates are not interchangeable between the two different walls. Castle A has "T" shaped tabs and a circular bump. You can see the corresponding floor plate has a square notch in it. Castle B has more simplified straight tabs and no circular bump. The floor also does not have the square notch in it. The notch is what names the floor not fit in the other wall setup. 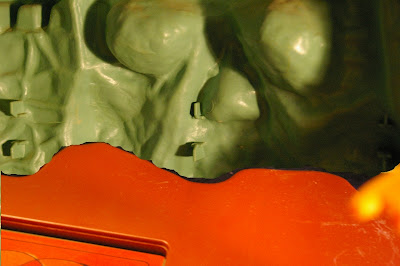 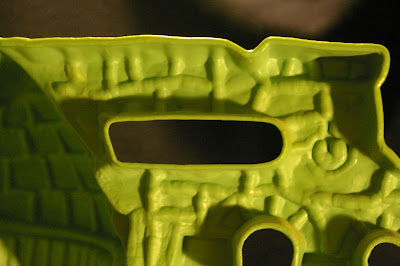 Taking a closer look at the inside of the back wall of Castle Grayskull we find another difference. Castle A just has the reverse of the details on the outside of the castle. Castle B has a sculpted area with some production information. "MATTEL INC    1981 USA      3991-2139"

Does that mean Castle B is older? Not really sure. 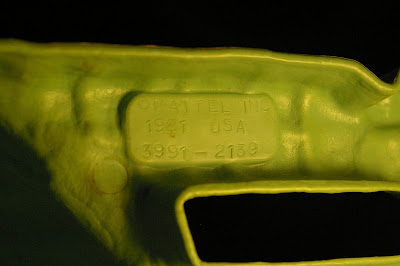 I've looked around a little on He-Man.org and the internet in general, but I haven't found a lot of specific information about the variations in the Castle. I'm not sure if there are only two major variations or lot of minor changes over the years.
Posted by Buzz Chuck at 7:29 PM