I had this "Wacky Action" Turtles as a kid, but sold him when I thinned out my toy collection in Middle School. My Mom bought me a TMNT case with some random figures at a yard sale some time in the past year. I have slowly been posting about those figures. I actually passed this figure on to a fellow toy blogger already, but hadn't posted about him yet. 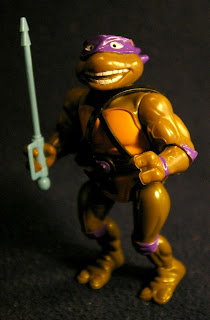 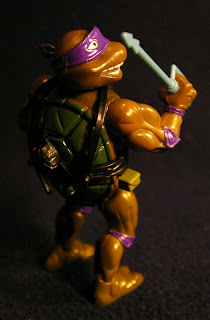 Sewer Swimmin' Donatello was a pretty cool toy and actually got a lot of use at my house back in 1989. I used this figure both on land and in the water. I liked to wind him up and hold him upright to make it look like he was running. I also used to take him in our swimming pool all the time since he could swim. Donny came with two accessories. One was a sewer-scuba jet which was a large grayish-blue missile looking object he could hold onto as a floatation device. The other was a harpoon that he can hold or clip onto the scuba jet. (Scuba Jet not pictured) 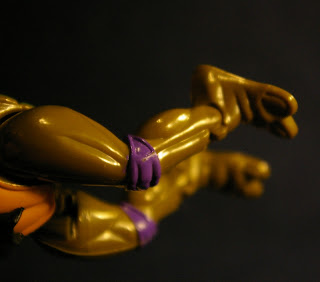 Donatello had a little knob, disguised as a pouch on his belt that could be wound up to make him kick. (this can be seen in the photo of his shell) He had a mechanism inside his torse that make his hips move in a swimming motion. His ankles also have articulation that allows him to stand normally or look like he is swimming.

If I didn't have a swimming pool as a kid I probably would not have been very impressed with this figure. It was fun to see how far he would swim.
Posted by Buzz Chuck at 11:09 PM